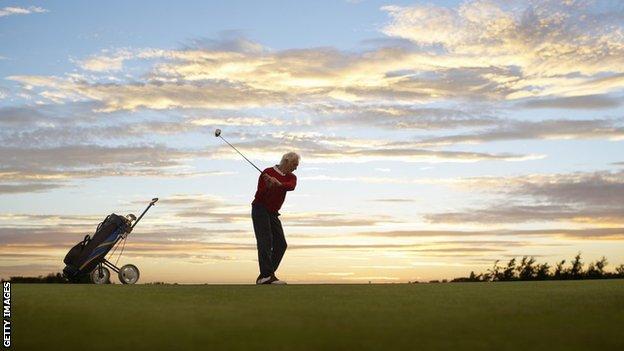 A regular game of golf is likely to increase life expectancy and lead to better physical health, according to University of Edinburgh researchers.

The review of 5,000 studies on golf and wellbeing found physical benefits increased with the player's age.

The study is part of the Gold and Health Project, which is led by the World Golf Foundation.

The project plans to look at gaps in the research such as golf's links to mental health and muscle strengthening.

Executive director of the Golf and Health project Dr Roger Hawkes said the aim had been to add some "scientific rigour" to statements made about golf and wellbeing.

"For a number of years we've felt we've underplayed the likely benefits of golf on peoples' health," he said.

"We already have a scoping review, outlining what we know already, and we're going to look at that research and the gaps in knowledge so that in five years time we will have really good evidence."

Having this academically firmed up through in-depth research is going to provide real, tangible resource

"Given that the sport can be played by the very young to the very old, this demonstrates a wide variety of health benefits for people of all ages."

It claimed that golfers walking 18 holes could cover four to eight miles, while those using an electric golf cart typically chalked up four miles.

Players burned a minimum of 500 calories over 18 holes, it said.

Find out how to get into golf with our fully inclusive guide.

World Golf Foundation CEO Steve Mona said the Golf and Health Project was vital to the development of the sport.

"This project is something we can all get behind, as it is universally agreed that golf is good for you," he said.

"Having this academically firmed up through in-depth research is going to provide real, tangible resources that can be used by governments and politicians, professional tours, governing bodies, golf businesses, PGA Professionals and more - all to the sport's benefit."

The research was released to coincide with the Alfred Dunhill Links Championship in St Andrews this week.

For more information on getting into golf, take a look at the Get Inspired activity guide on the sport.