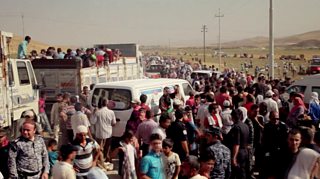 The Olympians with no nation

At the Olympics this year, instead of representing their country a group of elite athletes will be from Team Refugee - a team wholly made up of people displaced from their country of origin.

Funded by the International Olympic Committee (IOC), the athletes are from South Sudan, Syria, DR Congo and Ethiopia and will compete in swimming, running and judo.

We've profiled four of the 10 #TeamRefugees.

Fleeing from Aleppo, Syria could have meant the end of 25-year-old Rami's international swimming career - he's previously competed in World Championships. His family sent him to Istanbul to avoid conscription, and without Turkish nationality he was unable to compete despite training at the prestigious Galatasaray Sports Club in Istanbul.

Determined to compete, he made the perilous journey by rubber dinghy with his father and brother to Samos in Greece in October 2015 and made his way to Belgium, where he began training at the Royal Ghent Swimming Club in Eeklo.

He began intensive training at the club with two-time Olympian coach Carine Verbauwen in February and, after the Olympics, hopes to obtain Belgian citizenship for his whole family - as well as his mother, who is still in Syria.

Originally from the Democratic Republic of Congo, 24-year-old Popole learned his sport in a refugee camp. After his mother was killed when he was six years old he spent days alone in the rainforest, before being rescued and taken to an orphanage. He had a brother and two sisters, but lost contact with them at a young age.

Talented at judo from a young age, Popole competed at a national level for DR Congo - but he found that unsuccessful competitors were punished harshly, often beaten and locked in cells. When he joined the Congolese team for the Judo World Championships in Rio in 2013, his coach disappeared with the team's passports - and Popole decided to seek refugee status in the city.

He found life hard in the favelas, but eventually found help from the Instituto Reação, an NGO specialising in social inclusion through judo, and has since been training daily under Sensei Geraldo Bernardes - the former coach of four Olympic teams.

He has a Brazilian wife, Fabiana, and lives with her three children and their eighteen month old baby. Having been reunited with his best friend Yusuf in Rio two years ago, he hopes that after the Olympics he can unite his family in Brazil.

Also training under Sensei Geraldo Bernardes is 28-year-old Yolande who, like Popole, is from DR Congo. At 10 years old she was evacuated from her home town to a refugee camp in Kinshasa - her mother died when she fled and she lost contact with her three brothers.

She competed alongside Popole in the DRC national team and fled when he did after collapsing with hunger in the team's hotel. She said, "I just walked around, without a clue of where I was going and I stopped every black person in Rio that I could find and asked them in French if they were African, like me."

She found help from the local Congolese community and spent two years working in temporary jobs before being granted refugee status in Brazil. After finding the Instituto Reação she began intensive training despite a daily three hour commute, and is now living in an apartment in Northern Rio.

Born in Gondar, Ethiopia, 36-year-old Yonas now lives in Hamm, Luxembourg - and his road to Rio has not been easy.

He competed in 10km and cross country races in Ethiopia but fled in 2012, spending a month travelling by truck and plane to get to an asylum-seeker centre in Luxembourg after supporting the political opposition in his home country. He left his wife, daughter, mother and eight siblings behind, and hopes that his success as an athlete will help him to reunite with them.

He currently trains with coach Yves Göldi and qualified at Olympic standard with a minute and a half to spare after the International Athletics Federation tightened their qualifying specifications last year. Until now his lack of citizenship has proven a barrier to international recognition but despire this he's won titles in Luxembourg, France and Germany.

Have you been inspired by #TeamRefugees? Find guides on martial arts, running and swimming from Get Inspired.