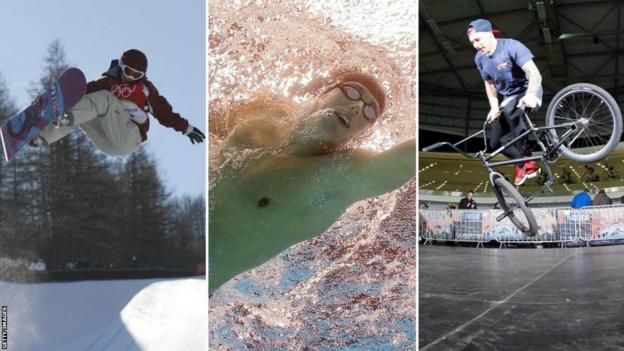 Described as a breakdancer on a bike, Keelan Phillips is the UK's top flatland rider. The Leicester-based BMX expert has won contests around the world and his films get watched by up to half a million people.

It was mastery of a snowboard that saw Lesley McKenna become a three-time Olympian and winner of two World Cup events. She now coaches the next generation of world-class snowboarders.

And from a long-serving snowboarder to a veteran of the pool - Robbie Renwick has already competed in two Olympic Games and is on course to make it to Rio. The swimmer is a Commonwealth Games gold medallist.

These three personalities will be answering questions from a studio audience of 16-18 year olds in a BBC Get Inspired Q&A, hosted by comedian Sanjeev Kohli.

The event will be broadcast live online on Friday, 18 March from 11.45-12.15 at bbc.co.uk/getinspired from Dundee International Sports Centre.

You don't have to be at the event to pose a question. If you would like to ask the panel something, send an email to: getinspired@bbc.co.uk with "Q&A" in the subject line. Sanjeev Kohli will read out a selection of the questions sent in.

BBC Get Inspired aims to encourage people to get involved and get active.

Keelan Phillips replaces Danny MacAskill, who was previously billed as part of this event.