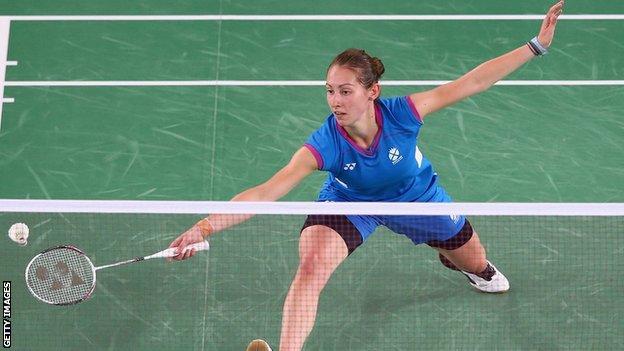 For about three weeks after the Commonwealth Games Kirsty Gilmour's mum was never far from tears, according to the women's singles silver medallist.

During a neighbourhood sports event, someone made a cake with her 2014 silver medal picture on it.

"My mum couldn't hold it together - it was hilarious," she says.

Luckily the 22-year-old seems able keep her own emotions in check.

The cool-headed badminton player was just shy of 17 when she was a quarter finalist in the mixed-team event at the Commonwealth Games in Delhi.

The following year, diverting from the traditional chronological path, she took part in the Commonwealth Youth Games and won the women's singles bronze.

"I kind of worked backwards, which was weird," she says.

So what sends a girl from Bothwell in South Lanarkshire on a "backwards" trajectory to sports stardom?

Kirsty picked a badminton racquet up at the age of five. She grew up travelling to badminton halls throughout the country with her dad, Brian, who was a national junior coach.

Her mum, Susan, and sister Louise - who is four years her senior - also played. Her uncle, David Gilmour, represented Scotland in the sport.

"My sister was really good - she used to beat me consistently - but she couldn't play in front of crowds," she says.

"My dad has always been quite sure that I have this weird focus.

"Maybe it was just blind naiveté on my part!

"When I was starting to come through the circuit I'd go on against people who were European champions, but I wouldn't know who they were - to me they were just another person."

Kirsty says it came as a shock when she was invited to go to Delhi in 2010. She was still at school - a pupil at the Glasgow School of Sport at Bellahouston Academy.

She savoured every moment of the experience: "I had zero pressure at Delhi - the complete opposite to Glasgow!"

She faced an intense build up to Glasgow 2014, with the weight of expectation from being second seed.

Despite this, she delighted the home crowd with a podium finish.

After the Games, Kirsty tucked her silver medal away and continued with her training and studies - she now has a batchelor's degree in Creative Industries Practice from the University of West Scotland.

"I literally turned up five minutes before lectures and left five minutes after they had finished," she says.

"So I didn't get the full uni experience."

Kirsty is philosophical about the sacrifices she has made.

"I do miss football and I used to love skiing, I can't even risk rock climbing.

"It's stupid things, but if I cut my finger I could be out for two to three weeks.

"It's a shame. But I can go back to these things later in life.

"I've only got this body and this career right now - and I'll probably only have it until I'm 30 - so I've got to squeeze everything out of it that I can right now."

The Glasgow-based player's hard work is continuing to pay off. She's steadily rising in the world rankings (currently 16th), she's confident she will represent Great Britain at the Rio Olympics next year, and she can look forward to a 2017 World Championships on home turf.

Anything from kids to a 90-year-old could play badminton

She hopes to persuade more people to value it as a sport worth both watching and playing.

"I think badminton is a sport that's very under appreciated," she says.

"It's fast at a high performance level, but for beginners to pick up it's really good too."

"Anything from kids to a 90-year-old could play badminton."

It's also low cost - simply requiring a hall with a few lines to mark out a court.

She adds: "I've see church halls with badminton lines painted up the stage."

It's hard to imagine even a vertical game of badminton putting Kirsty off her stroke.

"I heard a good phrase once: pressure is a privilege," she says.

"If you're good then there's pressure and there are expectations.

For Kirsty it's a matter of perspective: "My sister is a midwife - she brings new life into the world.

"I just hit a shuttlecock around for a living."