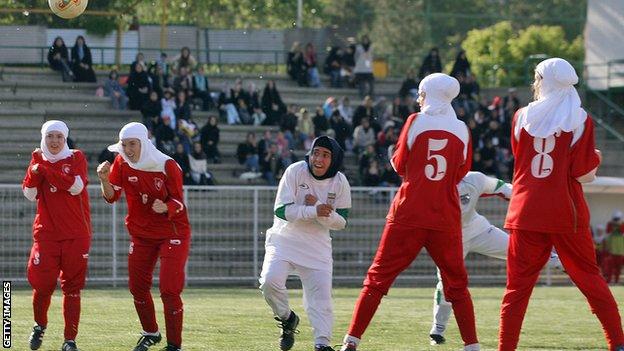 Sport England's latest participation figures suggest less than one in five Muslim females exercise at least once a week - lower than any other faith group.

Could a sports hijab make a difference? A martial arts champion from east London thinks so - and the BBC Asian Network has found out more.

What is a hijab?

It is a veil or scarf that covers the head and neck. Many Muslim women and girls choose to wear it in public as a symbol of modesty.

But the fabric is not always breathable, so anyone who wears one can get hot and sweaty when they play sport.

There is also a safety issue as pins are often used to keep it in place.

Why is a sports hijab different?

The aim is to make exercise a more comfortable experience for women.

British martial arts champion Ruqsana Begum has designed her own and hopes to bring it to the mass market.

"They're made of Lycra, they're stretchy and don't need pins," she said. "A woman or girl would just pull it over her head and be ready to play sport. They're also moisture-resistant."

Begum gained inspiration for her project by reading about Bahraini sprinter Ruqaya Al Ghasara, who wore a specially constructed hijab as she won 200m gold at the 2006 Asian Games in Qatar.

"Nike designed her a one-off piece and I thought more availability of sporty hijabs would get more young people interested in sport," said Begum.

She is not the only one to follow in Nike's footsteps. House of Fraser made headlines this year for selling "sporty hijabs" in its stores.

So what do the stats tell us?

While 30% of women play sport, that figure drops to 17% for Muslim females, according to Sport England's latest statistics.

The graphic below shows Muslim women lag behind other faiths when it comes to once-a-week participation in sport. 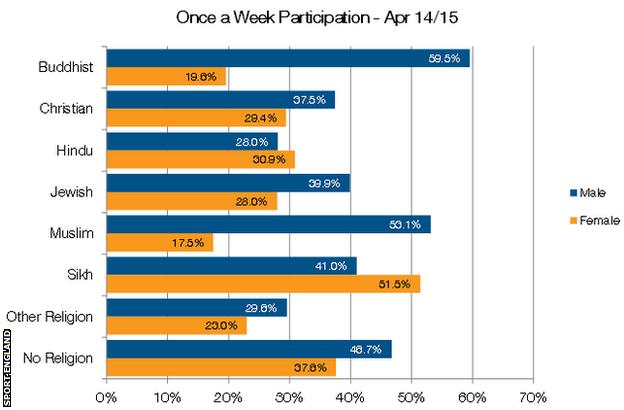 Begum, who works as a technician at a school in east London, says she has noticed some girls who wear hijabs do not want to take part in sport.

"Some of them are conscious about how they look or feel uncomfortable whilst training," she said.

But is there more to it than clothing?

Begum admits it is not just clothing that holds some Muslim women back.

"It's also about educating people about the benefits and creating opportunities," she said.

"Clothing for sports is an important part of improving the experience," she said. "I wear a sports hijab and it is definitely more comfortable."

However Akhtar feels there are a number of other issues to address including "the lack of knowledge and confidence in the sports industry" and the "provision of suitable opportunities and promoting a positive image of sport for all women".

What do others think?

"Sometimes when you're playing, you have to wrap it around again and stuff like that," she said.

She also says some Muslim girls are just not interested in sport or are lazy.

Amina Ismail, a 23-year-old from London, says she is not sporty but would get "so hot" when wearing a headscarf during PE lessons at school.

"I think sports hijabs should become part of the PE uniform," says Begum, who is already approaching faith schools and non-religious schools to discuss what more can be done.

The Department for Education said it wanted all children - regardless of their background or religion - to enjoy sports.

It added: "Schools are free to set their own uniform policies, taking into account the needs of their pupils and value for money for parents."

Ismail says sporty hijabs are not the answer on their own.

"I think even now people still see sports as a male domain, so it's more culture than religion that holds some women and girls back," she said.

"There could be more women-only classes, but with things like sports hijabs and burkinis - swimsuits some women wear to cover more of the body - nothing should stop Muslim girls from taking part in sport."