Lying on his back with a 200kg motorcycle crushing his chest was not exactly how Dan Metcalfe-Hall envisaged preparing for the helicopter ride he always wanted.

After being airlifted to hospital having taken the full force of his mate's bike in that road accident last June, the 27-year-old was told he would never walk again.

He was also soon telling himself to "man up".

"I am not the sort of person who is going to sit in the corner and cry about what happened," he told BBC Sport. "Life's for living.

"And at least I got to go in a helicopter. It was one hell of a way of paying to get in one, and I couldn't see a lot because I had a stupid thing around my head. But at least I got in one."

Having heeded his own rather harsh "man-up" advice, Metcalfe-Hall, from Grantham, is now one of Britain's top handcyclists, is chasing a Paralympic dream, has a hugely impressive list of races and charity commitments pending - and plenty more besides.

Life has altered to an unrecognisable extent in a little under 18 months.

From machine to push-bike power

It is the handcycling that takes up most of Metcalfe-Hall's focus, because he was quickly "hooked" and wants to be the best.

Currently ranked around the top 10 in the country, he knows breaking in to the world's elite will be incredibly tough because of the commitment to the training and the costs involved.

But he is loving the journey and is in no doubt he will achieve his goals.

"I want to win," said Nottingham-born Metcalfe-Hall. "And one way or another I am going to win. I want to be number one or two in the country.

"Handcycling has made me who I am now. It has given me a focus and a drive. It's given me purpose."

Handcycling is still very much a new sport in Britain but it is growing, according to Ian Durrant, treasurer for HandCycling Association UK.

"There's been a definite upturn in interest since the London 2012 Olympics and Paralympics," said Durrant, himself a keen handcyclist who helps run the charity.

"At the moment it is a much bigger sport in mainland Europe, America and Australia.

"There is some way to go to catch up with countries such as Poland, Germany, Austria, Spain because they have been doing it for much longer and have better support. But we are getting there."

Metcalfe-Hall is getting there in some style.

"His timeline is amazing from when he had his accident," said Durrant. "He has made remarkable progress. I am not sure I have seen someone come on so quickly - he's a natural athlete."

The road that led Metcalfe-Hall to his all-consuming handcycling addiction began when he "lost the front end of his bike" on a corner while riding in Bourne in his home county of Lincolnshire.

The accident itself feels like a lifetime ago because so much has changed. But the memories are vivid.

"I heard a great big bang - and felt it too"

"My mate was behind me and I took a right-hand bend that had gravel on it and I didn't see the gravel," he said.

"I knew it was going down so I got off of it, dumped the bike and got away. I remember seeing all the Tarmac flashing past my face.

"I only blacked out for a split second so I remember everything. Everything. And I still see it every now and then.

"I heard a great big bang and felt it at the same time. And then that was it and I woke up again and I was staring at a bike and after a few seconds thought 'that's not my bike' because we have the same bike, but his has different indicators and different colours.

"I had the bike laid head to toe on me and I couldn't breathe. But I wasn't going to bench press that in a hurry."

Are you feeling lucky?

Lucky might sound like a ridiculous word to use in relation to his accident, but Metcalfe-Hall tries to look on the positive side.

A first aider who saw the accident took control, alerting the emergency services, removing the bike, keeping calm and keeping Metcalfe-Hall safe until the paramedics turned up.

"He was brilliant," explained Metcalfe-Hall. "He talked to me all the way through, and did everything until the ambulance turned up.

"My mate had a twisted wrist after doing a cartwheel across the road and he knocked off his wing mirror - but I protected his bike because it was laid on top of me!

"It could have been a foot up and I could have lost my head, or a foot lower and he could have ran straight through me."

Metcalfe-Hall was taken to Nottingham's Queens Medical Centre, where it soon became obvious he was unlikely to walk again.

"The bone was through the spinal cord and had chopped through it," he added. "They said I would probably never walk again, and I knew that because I couldn't feel my legs. They said they wanted to get the operation done before things could get worse."

Three days later he was transferred to a specialist spinal unit in Sheffield and was soon thinking about the next stage.

Metcalfe-Hall could not wait to get out and find his "new life", pushing himself to the limits during his rehab, trying all sort of sports and activities from fencing to archery and tennis, and taking part in the Spinal Injury Games.

Within three and a half months he was out and about and discovered handcycling after attending a talk by athlete and inspirational speaker Kenny Herriot.

Then came the rather sizeable issue of finding the cash to fund his involvement in the sport. Handcycling equipment is not cheap.

But his family and former boss Dave King were able to raise approximately £11,000 at a charity event, enabling him to fund his bike, which cost nearly £8,000.

"You've been sat on your bum all day. Again" 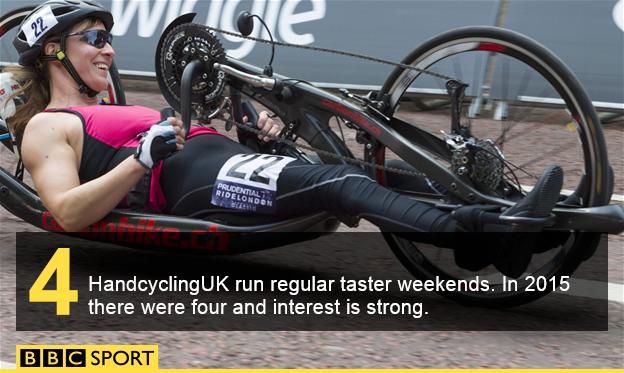 Metcalfe-Hall took part in Ride London 2015 and has a punishing list of events and races planned next year, from a skydive and wingwalk to the Three Peaks Challenge and the London to Paris Armed Forces Ride.

Keeping a positive outlook is his default setting - though he is the first to admit it has been made significantly easier by the "incredible support" he has received.

Dad Andrew Metcalfe, mum Wendy, King and countless friends are mentioned, particularly several able-bodied mates who would go on gruelling 10-mile rides in a wheelchair to keep him company.

"My dad's been great," he said. "We just have a laugh. He calls me 'Mr Wheeler' and I call him 'Mr Walker'. And Mr Walker helps out a lot in everything I do.

"He has a go at me and says, 'You've been sat on your bum all day. Again'. It's a good laugh. You need people to lighten things up.

"Everybody has their moments where they feel low and cannot deal with it. But then you say, 'Come on, get up and get on with with it'. I have friends who are a lot worse off than me."

"She still draws pictures of me stood up"

Metcalfe-Hall admitted the accident had been tough to deal with when it came to his relationship with his daughter Skye.

"She still draws pictures of me stood up which is a bit gutting," he added. "I was a big strong dad - a builder and a kickboxer - so I would throw her about and go on climbing frames and stuff like that.

"I still chase her about, throw her on the sofa and play fight and I fall out of my chair. We still do loads but she knows what my limitations are and is pretty good with it. I can still take care of her on my own as I did before.

"I am developing myself," he added. "The last year has just been phenomenal. I think 'Was it really only a year ago I was injured?' I have met some brilliant people, done some incredible things and had such kindness shown to me.

"And you have to get on with things. I cannot just sit around. Well, that's exactly what I do, but you know what I mean."