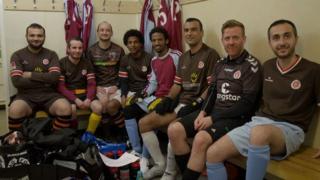 Yorkshire St Pauli are a team largely made up of refugees, who are inspired by a unique German club called FC St Pauli.

"We support St Pauli because they practise what they preach in terms of their anti-discrimination policies and their anti-prejudice principles. We see St Pauli as an escape, a little haven of equality." Richard told us.

FC St Pauli was an ordinary football club until the late 1980s, when left-wing fans began to shape the club rooting out discrimination and celebrating the team, the club and its fan scene.

FC St Pauli has a number of supporters clubs around the world and their matches are streamed to the Yorkshire St Pauli club house, where the team get together to watch.

The FA People's has brought together this multi-national team to play in their first tournament together. They may not have progressed to the next round, but they obviously got a lot of enjoyment out of being in the competition.

Catch up on the action from the first round of the FA People's Cup.