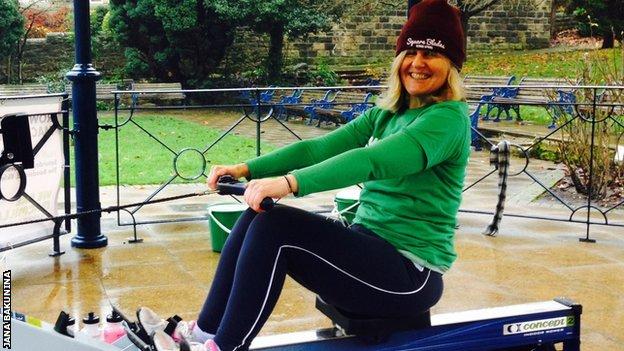 It's not uncommon to hear of girls and young women who stop exercising as teenagers. Confidence can be a major issue, life gets in the way, periods get in the way and suddenly keep fit fizzles out.

It was the same for Jo Moseley. But thirty-something years on, the mum of two has fallen back in love with exercise, all thanks to a rowing machine and the infectious feeling of being fit and healthy. This is her story.

"I am not a natural athlete. I am a very ordinary single working Mum of two teenage boys.

I gave up sport in my teens. Having loved it as a child, I was turned off by hockey and netball at school because I was always worrying so much about what people would think.

Things changed in the summer of 2013 when, in my late forties, I took up indoor rowing.

A friend had suggested it would help me sleep. Until then, I had avoided gyms for years and my only exercise was walking with friends, but generally not very far.

As I say, I have not been training for years and sport was not my thing, but I decided to do something a little bit extraordinary for charity.

My Mum died of Lymphoma in December 2013 and as my father has also had three types of cancer, I wanted to do something to say thank you to Macmillan nurses for their support.

My challenge was to row a million metres on an indoor rowing machine, followed by rowing a half marathon on a bandstand in Ilkley town centre and then row a marathon.

I rowed the marathon on 21 December 2014, the first anniversary of my Mum's death. Five days later, I turned 50.

I completed the million metres (over 600 miles) in 200 days, which equates to 10km every other day.

To date, I am one of only two women in the UK (heavyweight) who have ranked a marathon this season and one of only nine in the world.

As a consequence of all of this, I have absolutely rediscovered my love for sport and all of the physical, emotional and mental benefits it gives.

Not only has my self confidence been hugely boosted, I've also found that the rowing has helped me deal with the huge and at times overwhelming grief I felt losing my Mum, who was so central to mine and my sons' lives.

The power of exercise to keep you mentally as well as physically fit has been a massive lesson to me.

I often wonder whether I would have been able to support my sons through this very difficult time if I hadn't had the indoor rowing to support me.

Indoor rowing is an awesome sport for women of my age, who want a full body workout but with minimum impact on joints.

After reading about my story, people locally have asked me to start an indoor rowing club at my gym. In addition, two people on Twitter have decided to row a million metres citing me as their inspiration, which is overwhelming.

I've decided to take on an open water swimming challenge in June & join a triathlon club to train with. I would never have imagined that a year or two ago.

Many women, especially mothers juggling families & work, find it difficult to believe they can exercise.

But if a 49-year-old can go from zero to rowing a million metres and a marathon, then anyone can. Seriously, anyone!"

Are you inspired to try rowing? Or maybe you are a keen enthusiast already? Get in touch and tell us your experience of the activity by tweeting us on @bbcgetinspired or email us on getinspired@bbc.co.uk.