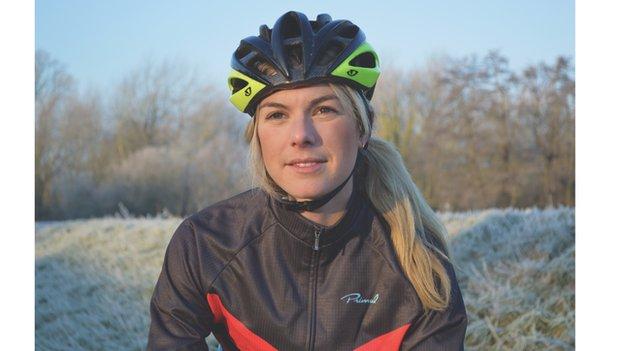 Two years ago Gaby Leveridge was working in the French Alps, organising fitness holidays for women.

In the winter, the personal trainer spent her free time snowboarding, while summer sparked the beginning of a love affair with bikes.

The longer days mixed with inspiring scenery, a group of encouraging friends and endless kilometres of quiet roads provided the perfect environment for Leveridge to unearth a previously hidden talent.

Among the names on the elite women's list was that of Gaby Leveridge.

The 25-year-old from Surrey had been signed up as a specialist climber.

"A lot of people are quite amazed, especially my friends in the UK, because a lot has happened in such a short space of time," she told BBC Sport.

Since 2013, Leveridge has turned cycling from a casual hobby to keep fit for snowboarding, into a serious passion.

She hopes it could eventually lead to a full-time career, but says she found it tough to begin with.

"I used to go out of the front door of the chalet I was working in and pedal as far up the mountain as I could until I was exhausted and then roll back down," she recalled.

Leveridge made swift progress and soon started competing in local races in France and Italy with other female cycling friends, partly for fun, but partly to gain experience of racing.

"A lot of those were mountain road races, so it would be 160km with quite a lot of climbing, usually 3,000-5,000m of vertical ascent, so you are off in the mountains for about five hours racing," she explained.

Spending five hours in the saddle might sound arduous, but it was nothing compared to what Leveridge put herself through in August 2014; the Transcontinental ultra endurance race across Europe.

The aim is simple. Competitors have to cycle from Westminster Bridge in London to Istanbul as quickly as possible.

Leveridge and her boyfriend covered the 3,600km in 12 days.

"You just go, there's no support, you do your own navigation and the clock doesn't stop, so if you need to eat or sleep that slows you down."

Despite sleeping for less than two hours in any 24 hour period and living off biscuits, croissants and high calorie convenience food, Leveridge came second in the women's race, five hours behind the winner.

On completing the endurance event, she got in touch with Velosure Starley Primal, mainly to ask for advice about racing in the UK.

"I sent them my results from the races I had done in France and Italy and spoke to them about the Transcontinental.

"I think because my results from that really stood out, they believed I could transfer those skills and the endurance I had gained, along with the results, to be successful with them in Britain."

Leveridge took the plunge, signed a contract and moved back to the UK.

She is now working part time in sports retail and is following an intense training programme as she prepares for a full season of racing.

The team's first race is the Cheshire Classic in April, which saw podium finishes for GB cyclists Katie Archibald and Laura Trott in 2014.

"I hear it's quite a tough finishing climb, so it will definitely be a good test.

"I really hope to get on the podium in a race this season, that's my biggest goal," she said.

To find out more about how to get into cycling use this handy guide.