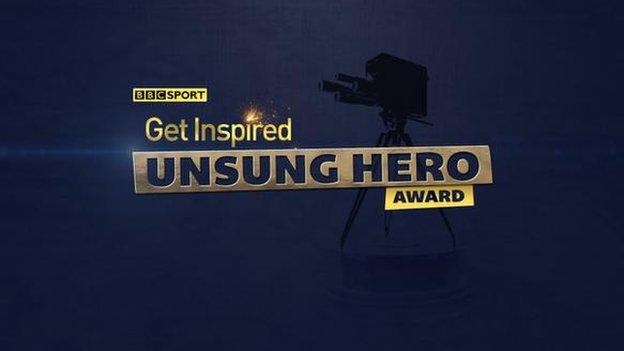 Now in its 12th year, the BBC Get Inspired Unsung Hero Award recognises and rewards outstanding contribution from those within local grassroots sport.

It could be a person who gives up their time to encourage others to take part in sport, or someone who is helping to unearth a champion of the future, or maybe they are the ones who keep a local team or club going.

Following the nomination period, a panel met in each of the BBC's 15 Nations and English Regions - and a winner was chosen from each area. All of these winners will join the sporting icons of today at the BBC Sports Personality of the Year 2014 event in Glasgow on Sunday, where one of them will be chosen as the overall 'Unsung Hero' winner.

Meet each of the regional winners below.

For over 50 years, he's given his heart and soul to the sport - and produced nine Olympians out of the Hatfield Swim Centre along the way.

"The greatest pleasure I get is seeing the youngsters do well, improving on their dives and then performing in competition," says Derek.

Now in his 80s, Derek remains an influential figure at the side of the pool every day.

Swimming coach Jill Stidever says she is humbled to be named the BBC East Midlands Unsung Hero for 2014.

The 77-year-old, who lives near Hinckley in Leicestershire, was extremely emotional as she was given the award by BBC East Midlands Today presenter Kirsty Edwards in recognition of her work helping disabled children learn the joys of swimming.

Dave runs a judo club in the local area, as well as being a member of the London area committee and refereeing nationally.

"I'm lucky enough to coach and teach a sport that I have grown up with and loved for years," said the 51-year-old.

"I do the sport because of the youngsters and the reaction from them."

Yvonne got involved with setting up the Roch Valley Raiders BMX club in 2009 and now has riders that represent Great Britain.

She combines roles as club secretary, race commissaire and trainee mountain bike coach at the club in Heywood.

"I'm extremely proud of what we've achieved here, especially as I'm not from a cycling background," she said.

Mervyn was chosen in recognition of his his commitment and dedication to the youth programme at Ballinamallard United football club.

He has proven his dedication to all elements of the club - as well as being Chairman of the Youth Committee, a key member for the Ground Development committee and fundraising for the club, he has also taken responsibility for washing the kits and mowing the grass - that is before the installation of their new 3G pitch.

Surprising the couple, Commonwealth judo gold medallist Euan Burton presented the trophy to them among a host of people who have been inspired by everything that the Grahams' do for their local community.

Bernard - now at Abingdon Athletics Club - has been involved in athletics for 50 years, and says that becoming a coach was about giving something back to the sport he loves.

"I always intended to get into coaching," said the 65-year-old. "I've been in the sport now for over 50 years as a competitor and a coach so I'd like to think they could feed off my experience."

The 89-year-old joined Folkestone Badminton Club 30 years ago and has primarily worked with the junior section since then.

"With some of the kids, I have taught their parents. I have had a lot of satisfaction and I want them to get it too," he said.

The 68-year-old has been involved with Dart Totnes Amateur Rowing Club in Devon for 25 years and had helped win a grant to build a new boathouse and training facilities.

He still devotes hours every week to the club, despite recently being diagnosed with Parkinson's disease.

"There are two options, one is to sit in the corner and just disappear, the other is to carry on," he said of his illness.

The former teacher from Newtown has been involved with the with Mid Wales Orienteering Club for 24 years and organises, promotes and plans events for its members - and 42 local schools.

"It's just lovely for this lesser-known sport and our club be recognised like this," Bill said.

"I love orienteering and want others to enjoy it."

Chris, now 69, helped set up the pioneering football club in 1967, making the Swindon Spitfires one of the oldest girls teams in the country.

He has spent the last 46 years acting as groundsman, barman and driver, while his wife has coached thousands of players who have come through their set-up.

Current players and parents of the children involved have called the couple the "heartbeat" of the community.

After arriving in Birmingham as an Irish immigrant in 1966 at the age of 12, he joined the Erin Go Bragh club in Erdington - and helped create four new junior Gaelic football teams, as well as starting up camogie for girls.

Now 60, having overseen the development of Gaelic football, hurling and camogie in the Midlands for almost 50 years, he admits simply: "It keeps me fit and active."

Bert has been coaching basketball for 48 years after playing the sport at college.

The 72-year-old, who coaches two nights a week and at weekends, says he has no interest in cutting back his commitments with the Darfield Dunkers.

He said: "As long as my health is good I will keep going because I want to do it. I look forward and think, how many more teams can I run?"

Roger Tanner is a former school teacher who, for the past 50 years, has been the fulcrum of the Hull-based East Riding Badminton club.

In that time, he has coached thousands of badminton players in the city and across East Yorkshire, and was was at the heart of funding raising activity and grants-application process needed to carry out work to refurbish the club's 50-year-old hall.

Having been involved since the club's inception in 1964, Roger not only coaches and runs tournaments, but he also still finds time to play.

Watch the BBC Sports Personality of the Year 2014 on BBC One from 2000 GMT on Sunday 14 December to find out who wins.