Whatever the sport, clubs big or small - they all rely on the good will of volunteers.

But what motivates people to get involved in grassroots sports?

For one Glasgow teacher, who had no recent experience of sport, it was a school trip to watch handball at the London Olympics.

Two years on and some of Fiona Kennedy's Kelvinside Academy pupils play for Scotland's under 15s handball team.

The 34-year-old says she was into athletics as a child. However, her involvement in sport fell by the wayside when - like many of us - work and family life got in the way.

Nominate your own Unsung Hero

The idea for trying handball was formed during the bus journey home from London, according to her pupils.

"We just thought it would be quite fun to start playing it," said 14-year-old Diego Hidalgo.

Scarlett Green, 14, added: "We just expected it to be something that we would do in our spare time. We didn't realise we would get this far."

"It turned out we were pretty good at it," said Zander Geddes, 14.

Shortly after the school trip, Mrs Kennedy completed a level one training course in handball.

"I just thought why not give it a go," she said.

"And within six weeks we'd entered the Scottish championships, where we came third.

"It's just been an incredible journey since then - we're now Scottish champions four times over.

"Plus seven of the girls play for the under 15s Scotland team, and the boys are ready to start their Scotland journey soon." 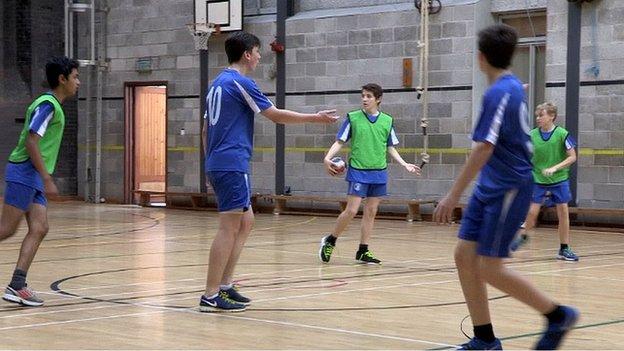 Stephen Neilson, of the Scottish Handball Association, said handball participation had doubled in Scotland since the London 2012 Olympics.

"It's such an accessible sport," he said. "The only thing you really need is just a ball and then you can play handball.

"But the most critical aspect of the sport is people like Fiona and the volunteers who can help us develop the sport."

The Kelvinside Academy pupils are clear who they have to thank for starting their handball journey.

Colette Elliott, 13, who now captains Scotland's under 15 squad, said: "Mrs Kennedy really took handball from nothing and just gave us all these opportunities."

Scarlett added: "Because she's been here, it's made such a dramatic change to our sporting lives."

If you know a volunteer who has inspired people to take part in sport, why not nominate them for the BBC's unsung hero award. Go to bbc.co.uk/unsunghero for more information.