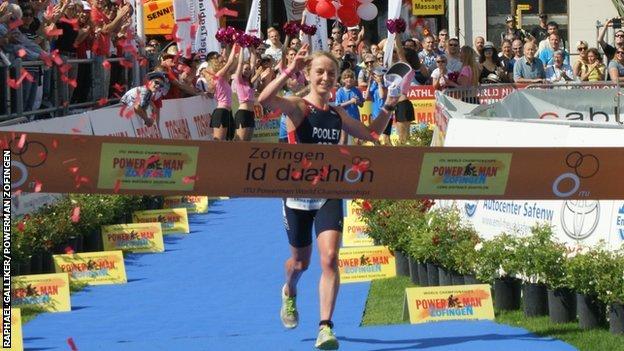 "If you love something enough, you can put up with a bit of suffering," is Emma Pooley's sporting philosophy.

Which goes a long way to explain why, after retiring from professional road cycling only last month, she has already become a world champion in her new sport - long distance duathlon.

The 31-year-old broke the course record in Switzerland, tackling the gruelling course which consisted of a 10km run, 150km bike ride and a further 30km run in a time of 6:47:27 - more than half an hour ahead of the second place finisher.

She told BBC Sport: "I have been wanting to take part in the Powerman World Championships in Zofingen for many years.

"I love running as well as cycling and the course was very hilly which definitely suited me.

"But as a professional cyclist, I could never do it, because it's only a couple of weeks before the UCI World Championships and that's simply too short a time to recover.

"So, when I retired from cycling in August, I did have Zofingen at the back of my mind as a target.

"I thought it would be a good test of my new challenge of trying to race professional triathlon! But I only had about a month to do some hard run training after the Commonwealth Games, so I was concerned that I wouldn't survive the running.

"But I think that sometimes if you love something enough, you can put up with a bit of suffering! I really love running - and actually I think I run better off the bike than fresh, relative to other people.

"By the last descent into the finish my legs were killing me, downhills really damage the muscles. But I knew I had a good gap on the next competitor and so there was not too much pressure, which was definitely a relief!"

Pooley's aim when she started at Cambridge University almost a decade ago was not to become a professional sportswoman.

The then engineering student, who completed a PhD in geotechnical engineering, only started cycling at the age of 22 as a bit of fun because an injury at the time prevented her from long distance running.

A surprise fourth place at the National Championships set Pooley off onto what ultimately became a successful career on her bike for nine years. She won a time trial world title, national titles, an Olympic medal, and numerous professional races before bowing out at the Commonwealth Games with two silver medals to her name.

Although now concentrating on duathlon and triathlon, Pooley will remain on cycling's world governing body, the UCI's women's commission where she works to bridge the inequality gap between men's and women's cycling.

Pooley, alongside world and Olympic champion Marianne Vos, Ironman champion Chrissie Wellington and Kathryn Bertine was instrumental in lobbying for a women's Tour de France which led to La Course being staged around the streets of Paris in July.

"It's a positive time for the sport. I'm really happy to see it improving. La Course is the start of something great, and I hope it will grow next year; I'd love to see a longer women's stage race in France," Pooley said.

And she is a big advocate of cycling for fun and is an ambassador for Breeze, which is a British Cycling initiative to get more women on bikes.

"The Breeze rides are a great way for women to try out cycling in a no-pressure, friendly environment," she said.

"Cycling can be a daunting sport, especially when you're new to it - I can remember when I started I didn't know what kit to wear, how to stay warm enough, or that there are saddles out there that can make cycling so much less painful!

"Whether you want to cycle to commute, for fun, for fitness, or to get into racing - these rides are a great way to get started and develop a regular cycling routine. It's often easier to go out cycling when you're meeting others and know you'll have good company for your ride!"