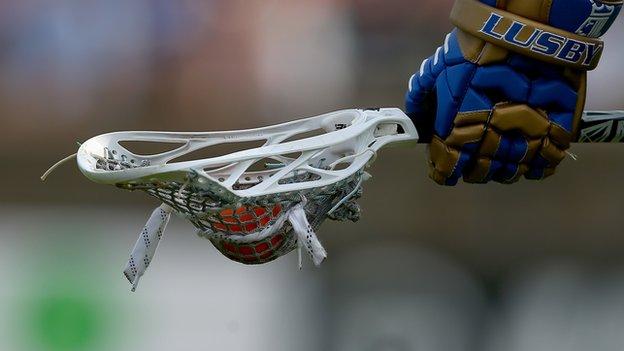 Lacrosse is a fast paced, exciting and dynamic activity. The sport is regarded as one of the fastest games on two feet and attributes from a variety of games such as Basketball, Rugby, Ice Hockey, Field Hockey and Football can be seen in a match.

Although Men's and Women's Lacrosse differ slightly, with one being full contact and the other being limited contact, the object of the game is the same - to score in the oppositions goal.

Players use a long-handled racket (known as a crosse or lacrosse stick) to manoeuvre a rubber ball during play by either catching, passing or carrying it in netting attached to the end.

Lacrosse is an intense and physical game that requires speed, quickness, hand-eye coordination and a competitive instinct.

It is an active team sport providing a substantial aerobic and strength-building workout, as players run up and down a long, rectangular field to get the lacrosse ball into the goal.

Lacrosse players need to have the strength and dexterity to catch the lacrosse ball, throw it and take shots at the opposing goalie. The intensity of the sport provides a wide range of physical health benefits both internally and externally, and can also improve mental health.

Lacrosse clubs will provide all the equipment, referees and coaches to members. For beginners, all you will need is a mouth guard.

English Lacrosse offers a get 'INTO Lacrosse' programme which aimed at getting people playing in a fun, social and friendly environment. This is a great way to start playing lacrosse.

If you are looking to get into Lacrosse in Wales or Scotland, visit the Lacrosse Scotland or Welsh Lacrosse Association websites for details of where to play near you. For lacrosse enthusiasts in Northern Ireland, Ireland Lacrosse can help you on your way.

Lacrosse is one of the oldest team sports in the World. Its origins are from North America where French Missionaries first observed Native Americans playing a ball game with a stick and a net which resembled a cross so they named it "La Crossier" which over time has been shorted to Lacrosse.

The native name for the game was 'Baggataway' meaning 'little brother of war' this was because the game was actually used to settle disputes between rival tribes and the games were often brutal and played for days on end.

The game was widely played by the tribes of the Iroquois Confederacy, which today reaches from Ontario in Canada to Upstate New York in the United States.

Lacrosse today has become one of the fastest growing sports worldwide. In Europe 28 countries now play lacrosse, with world power house, USA boasting a professional league and a collegiate system that often attracts 60,000+ spectators to the annual championship final.

In the United Kingdom the sport can trace its origin's to the late 1800's where a touring team of Canadians and Native Americans brought the sport to demonstration tour around the UK including a playing a demonstration game for Queen Victoria I. Clubs were formed all over the UK from Glasgow to Manchester to London.

The women's game can trace its origins to Scotland and St Leonard's school where the first game was played in 1890. The game is still popular within girl's schools however the game has become more inclusive and club teams can be found throughout the county.

The Women's Lacrosse World Cup will be hosted by England in 2017. The games will be held in Guildford.

Are you inspired to try Lacrosse? Or maybe you are an enthusiast already? Get in touch and tell us your experience of the game by tweeting us on @bbcgetinspired or email us on getinspired@bbc.co.uk.