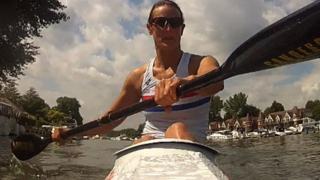 European paracanoe champion Anne Dickins tells BBC Sport how a chance encounter with a then fellow Games Maker at the 2012 London Olympics saw her take up a brand new sport in which she is now a Paralympic medal hope for Rio 2016.

Dickins was an endurance mountain bike racer before sustaining a serious back injury in 2011, but within a year of taking up paracanoe sprint became World silver medallist and European champion.

The 47-year-old is now through to the final of the latest European Championships in Brandenburg, Germany on Saturday.