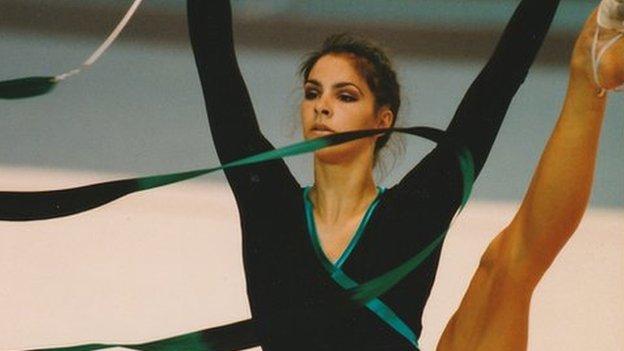 Twenty years ago Jo Walker became the first Scottish gymnast to win a medal at the Commonwealth Games.

Seriously, did anyone else know this? Even those who only take a vague interest in Scottish gymnastics will be familiar with the names Steve Frew and Adam Cox.

Frew took gold in the men's rings at the 2002 Commonwealth Games in Manchester, while Cox won the high bar bronze at Melbourne in 2006.

But Jo Walker? Apparently she is a rhythmic gymnast who won bronze in the hoop in 1994 at the Victoria Games.

I was intrigued. I decided to track her down - it would be easy. I typed her name into a search engine...

Much fruitless internet and social media searching later, I was eventually led to the owner of a gymnastics club in Swakopmund in Namibia, who managed to get hold of Jo's mobile number.

This is Jo Walker's story - a Scottish Commonwealth Games medallist 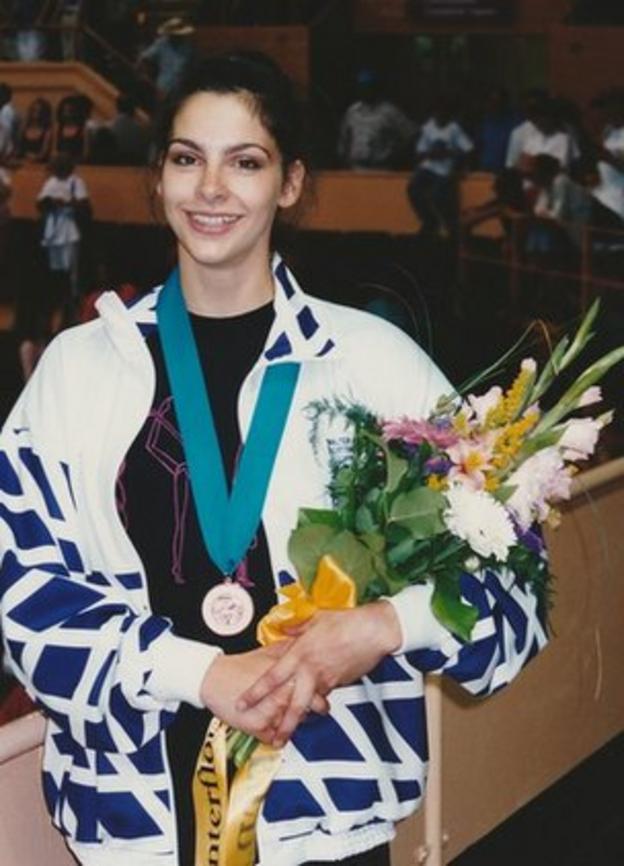 Winning a medal was a bit surreal.

It was something that I wanted, had dedicated hours of hard work for, but never really expected due to my own lack of self belief.

When it did happen and I was standing on the podium, I remember thinking that at least I can retire from the sport having achieved something tangible.

After all the years and hours of hard work, pain, tears and sacrifice - to retire without that would have felt like it was all a bit of a waste of time.

There was no media attention, no fame or fortune!

But there was no media attention, no fame or fortune!

I'm now 43, living with my partner in Noordhoek, Cape Town, South Africa, with my step-daughter and our dog. I work in the film industry as a production manager - mainly working on international commercials.

I was born in Paisley, but grew up in Otley, West Yorkshire where I started ballet and artistic gymnastics.

I was getting too tall (I'm now 5'10") for "normal" gymnastics and was always very supple, so physically I was much better suited to rhythmic gymnastics.

One of my sisters was doing rhythmic at her local school so I went to try.

My mum didn't think I would enjoy it as the floor was my least favourite discipline in artistic gymnastics.

However, she was wrong and I carried on!

When I was about 13, I moved to Beaconsfield, Buckinghamshire, with my parents and two sisters.

I trained at Cranford Rhythmic Gymnastics Club and later moved to Hillingdon School of Gymnastics.

In hindsight, I realise my family made huge sacrifices. But at the time, things just evolved to longer hours, more days training, and further to drive - especially when I made the regional squad.

Without them it would have been impossible for me to achieve what I did and still turn out to be a relatively normal person!

Despite lots of trials, I kept missing the cut for the national squad of 30 girls.

My big break didn't come until 1989, when I was already considered old at 18! Russian coach Iriner Viner was appointed the GB coach and she cut the squad from 30 to 10. I made it onto the team.

I did what any self respecting gymnast does when they retire - I ate chips and drank lots of beer ... and got fat!

I went on to represent Great Britain in many European competitions, as well as three World Championships, and two European Championships.

At that time Scotland wasn't really on the map with regards to rhythmic gymnastics.

Yet when I tried to compete for Scotland at the 1990 Commonwealth Games, I wasn't accepted due to the fact that I didn't live in Scotland.

By this point, I was training five to six days a week for three to four hours a day. For two months, I had been on a gruelling training regime at the National Olympic Centre in Moscow, Russia.

It was so disappointing. I was born in Scotland, and I even have great Scottish sporting heritage!

After a bit of lobbying, I was accepted onto Scotland's 1994 Commonwealth Games team. 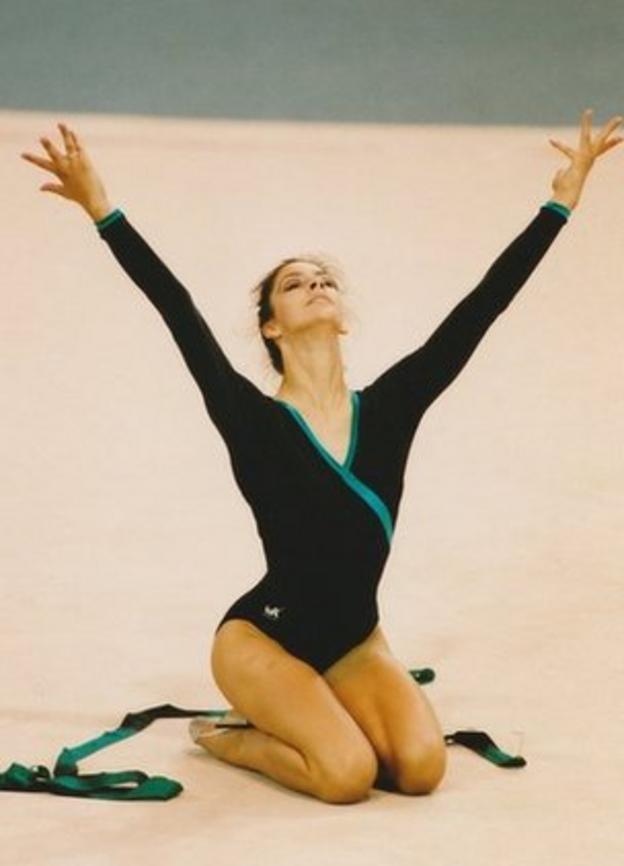 By then, I was second overall in the British Championships, and individual winner in hoop, ribbon and clubs.

The closest Scottish competitor was way down in the rankings, and finally I seemed like a good option for Scotland.

After my success at the Commonwealth Games, I retired from the sport and moved to Namibia to take up the post of national coach for a few years.

It was meant to be for six months but I fell in love with the country so stayed.

Finishing my university degree, moving to a completely new continent, no longer having to worry about what I ate, not training 24/7, not being worried about what I looked like in a leotard, was all a complete upheaval of everything that I had spent almost the last 15 years of my life doing.

I started making up for lost years and I did what any self respecting gymnast does when they retire - I ate chips and drank lots of beer, gained 20 kgs (about 3st) and got fat!

While in Namibia I realised that I was talented in other sports. However, I knew that I did not want to do an indoor sport ever again - though that could have had something to do with the beautiful African sunshine.

I cannot imagine being a coach potato and I'm like a dog locked in a house if I haven't exercised for a few days.

And in case you are wondering, I eventually lost 12kgs!

I started playing two-a-side beach volleyball and was Namibian ladies champion for a few years.

My volleyball partner was very patient with the way I pointed my toes whiles gracefully diving for the ball!

I learned to skydive and got involved in filming tandem skydivers when the local club needed extra help.

I started mountain biking and was the Namibian "veteran ladies" downhill champion for a year - though I was the only competitor! 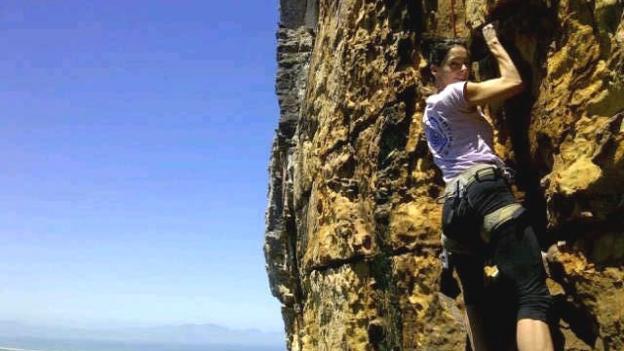 Then my South African partner introduced me to the sport of rock climbing, which I love.

It combines hiking a few hours to the bottom of a peak, with the adrenalin of the actual three hours of climbing, and then the rush to get down the mountain side before dark and without getting mugged!

I also enjoy watching sport, and I always put on my Scotland rugby top every time Scotland are playing South Africa and endure the taunts and sympathy from the usually victorious locals.

Having talked to my sisters over the past few years and asked them if they were annoyed by the amount of time our parents spent driving me around, they said that they were always very proud of what I achieved - although they never mentioned it at the time!

In our family I was never made to feel special. I was one of three children. It wasn't just about me, I just happened to do gymnastics.

If Jo's story has inspired you to find out more about rhythmic gymnastics, have a look at our dedicated Get Inspired page on the sport.