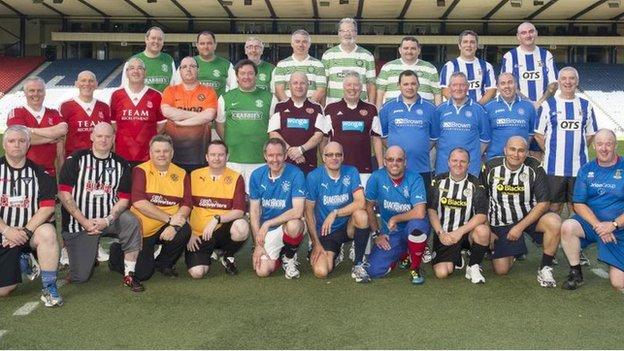 Does the World Cup have to signify a month of booze and junk food in front of the TV, and an exercise regime thrown out the window?

While football players representing 32 countries perform impressive feats of athleticism on the pitch, will the rest of us be slumped in our sofas?

If you want to avoid couch potato syndrome during the tournament, then here are tips from some football fans.

They all took part in the Football Fans in Training (FFIT) initiative, which offers people a free 12-week eating and fitness course at their favourite football club.

TIP: I am going to watch games on two TV's in separate rooms (one upstairs and one downstairs). Every five minutes I am going to walk up the stairs, watch 60 seconds of action and then walk down again.

I reckon that means I will walk up on average 190 stairs per game. With 64 games that will mean I have walked up over 12,000 stairs or the equivalent of six and a half times to the top of the Empire State building and back down again.

I wasn't always overweight. I'm not sure how it happened but happen it did. A whopping 19.5 stone said the scales, time for action said my brain. At 43-years-old, I suddenly thought about my own mortality at to be honest, it scared me.

Luckily though, I had just read about a new programme called Football Fans in Training on the St Johnstone FC website. It sounded right up my street and without seeming over dramatic, it probably saved my life.

Four years (and some hard but fun work) later I tip the scales at a smidgen over 16 stone.

I now have a very active lifestyle which includes playing football regularly, climbing Munros and I even fulfilled a lifetime ambition by walking the West Highland Way from Glasgow to Fort William twice. None of this would have been possible without the FFIT programme.

I love my football and will watch pretty much any game, so with the World Cup it will be wall to wall action. This obviously means my exercise routine will be heading out the window and therefore I have hatched a cunning plan to avoid falling back into old routines and gaining weight, which I worked hard to lose.

TIP: Practise your dribbling skills, whether walking, running, using cones, doing step overs or whatever. With football fever about to grip there's nothing better than getting the ball to feet and familiarizing yourself with it.

I recently took part in the FFIT at Aberdeen FC having got involved through a friend who had just started working at the club. I've always struggled to keep my weight down, but having broken my ankle eight months previously I felt I was becoming even more lazy and far too protective of it.

Like all the others I found the course a bit slow going to start, but I took on board what I was being taught. After all, if you don't have the right tools for the job then you may never complete it.

The weight began to fall off me purely by following the little hints and tips I was being given. No diet - just eating better and slowly becoming more active. By the time I had completed the course I had shed just short of two stone. I still feel I have a long way to go to get fit, but FFIT has given me the tools to do it! I feel much happier within myself, and my home life has improved greatly - especially the time I spend with my daughter.

TIP: Although you sit on the couch to watch the football, there are some simple exercises that can be done - like keeping you legs together and pulling them up to your waist. Once the game is finished you could go for a walk.

I had not done any training in nearly 15 years. Like most people, my waist line was expanding and my fitness was reducing.

It was always the same old story - "I will start doing something about it next Monday" and next Monday never came.

I needed some help and FFIT came at the right time. It's a great programme as all the guys are there for the same reason. The support and banter made it enjoyable. The coaches were first class, with an encouraging word when needed.

My start weight was 132.3kg and my finishing weight was 118kg. I have kept up my fitness plan by walking every day and I have lost a further 3kg.

TIP: Exercise before at half time and at full time.

Before I Started FFIT I would come in from work have a meal and then fall asleep on the couch. I knew I had to change something.

When I heard Celtic where doing FFIT, I looked into what it entailed and realised it was what I needed. I was coming up for my 50th birthday and it was an ideal opportunity to do something.

The first night I was filled with trepidation as I didn't know what to expect, but I needn't have feared anything. The coaches helped straight away and I bonded with the other guys pretty quickly.

After I finished FFIT I started active fans at Celtic Park. I've done another two FFIT sessions because the coaches asked me to go back and do a talk with the next courses, In the year since I did FFIT I have lost six stone.

TIP: A nice walk or cycle each evening before kick off. Or watch the game while using an exercise bike .

In January 2013, at the age of 50, I decided I needed to do something about my weight, which over the years has crept in the wrong direction.

I became aware of a course being run by Inverness Caledonian Thistle Football Club. After talking it through my work colleague, we both decided to sign up.

Over the 12 weeks we discussed portion control, calorie intake, steps average (which we recorded daily). Every training night we would complete some physical activity, with the coaches building up each week.

During this time I managed to lose 19kg going from a 42in waist to a 36in waist. In the 12 months since the sessions ended I have managed to keep up the training and also watched my weight through portion control. It's a challenge I know I can meet due to the information we were given on training nights.

TIP: Set yourself some goals like walking before matches, and add some exercises in like star jumps or sit ups at half time.

Before FFIT I did little or no exercise. I saw a leaflet while queuing for a pie at the match. I signed up and I'm now reaping the benefits of the course.

I learned about healthy eating and portion sizes. Also, the exercise was really hard but very enjoyable.

I lost a total of two stone in weight and shed 24cm off my waistline.

I now train twice a week at the Celtic active fans class and I've joined a gym. I'm really loving life and the benefits FFIT has brought me.

While I have been active all my life, through playing football, my diet has let me down. I found out about FFIT after receiving the Dundee United Football Club newsletter.

I was looking for a way to get fit and lose weight, which I would also find enjoyable, and felt this would be perfect for me.

I have managed to lose weight, keep fit and maintain my weight by following the tips and advice given by the FFIT team. I have made a few good friends and have taken part in football games between the various FFIT teams, which I have loved.

FFIT is fantastic - though Danny's jokes need a bit of work! It's changed my life so much for the better.

TIP: I exercise while watching the games with hand grips and small weights. I've even been known to do a 15 minute circuit at home at half time

The FFIT coach referred me to see a doctor due to my blood pressure being very high. My doctor gave me a really hard time for being overweight and for smoking too much - classic causes of high blood pressure along with a lack of exercise. I'd never have gone to see him if I hadn't been referred.

The very fact that it was at Aberdeen FC was its biggest draw - it was really motivational. We'd be sitting in the players' lounge hearing about things like portion control.

We also exercised. We started off walking around the stadium and built it up until we were doing circuits on the concourse of the Richard Donald Stand. We also did gym sessions in the gym that the players use. And because of the banter with the other guys on the programme you really wanted to do well.

I lost 2.5 stone and went from a 42in waist to 34in. Yes I did put weight on again but I have stayed within the 10% goal after one year which is the measure of success. I now play football for two hours a week, run two to three 5ks a week, and help deliver FFIT as a volunteer with AFC Community Trust.

TIP: Rather than feel guilty about lazing about all evening watching the World Cup, I have made a decision to run before the first games and take the dog for a long stroll in between games.

Or you could just lay in the plank position for the duration of the tourney hoping not to spill your kebab or lager all over the carpet.

I recently took part in Football Fans In Training with my team, Rangers.

I decided to participate in this not only to shed some pounds but also to get my general fitness back into shape.

I am writing this just having done a three mile run - something I would never have imagined me doing at the start of the 12 week course. It just shows how far we have come.

If you live in Scotland and are ready to get off the couch, go to Football Fans in Training. To get yourself back into playing football, no matter where you live in the UK, take a look at the Get Inspired Football guide.