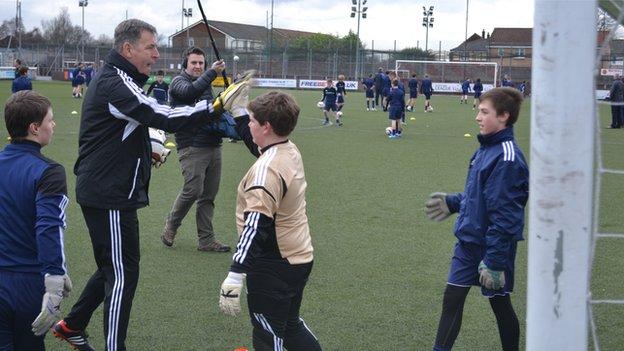 How do you become a great footballer? Listening to older players and going to the gym at night after training were among the suggestions from three football stars at a Q&A session for more than 40 school pupils in Stirlingshire.

Earlier, the Larbert High School pupils had been put through their paces during a football masterclass at Stenhousemuir FC, with Kris Boyd, Derek Ferguson and Pat Bonner.

The event at Stenhousemuir FC on Monday 25 February was the first in a series of BBC Radio Scotland Sportsound roadshows, which aim to promote the sport and give young people the chance to rub shoulders with their football heroes.

"The good thing for me was the attitude they all showed," said Ferguson.

"We know there are different people in terms of ability and fitness, and there were one or two who stuck out a little bit."

After training, the pupils took part in a Q&A session with the coaches, during which Boyd was asked about his childhood heroes.

"Who did I look up to? For me, Ally McCoist and Alan Shearer. They were my favourite two," the former Rangers forward revealed.

The training was held at Stenhousemuir's Ochilview Park and chairman Bill Darroch told the Sportsound panel how the club helped the community, and vice versa.

"The community is the club and the club is the community," he said. "We've got thousands of kids coming through Ochilview every year - from three-year-old tots to 50-year-olds playing five-a-sides.

"So, we very much embrace the community and it's part of the fabric of this club."

The idea behind community sports hubs is for clubs to come together in one area and provide activities. The Tryst Hub's other sports include golf, table tennis, basketball and water polo.

Both the club and the school have been recognised at international level, according to the Hub's Billy Brotton.

"The club were winners of the best professional club in the community in 2012," he said.

Bonner stressed the importance of finding the next crop of stars. "The future of the Scottish game, for me, is in grassroots," he said.

Larbert High School teacher Daniel Downie, who helped organise the event, added: "I'm really glad we managed to, not only give these kids a great experience, but a great memory as well."

BBC Sportsound will be touring the country between now and May, along with some well-known names.

For more information about where the team will be next, check out Sportsound on BBC Radio Scotland.

To find out about taking part in football training in your area, go to the BBC's Get Inspired pages.