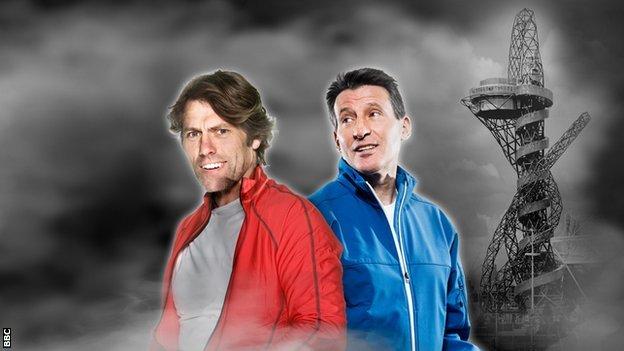 Two-time Olympic champion Lord Coe and comedian John Bishop have announced their teams for their head-to-head challenge next month as part of this year's Sport Relief.

The pair will lead two two teams of celebrities in sporting challenges at London's Queen Elizabeth Olympic Park on 21 March.

The teams will take part in events, including rhythmic gymnastics, track cycling and swimming and the event will be broadcast live on the BBC.

Bishop, 47, said: "Am I intimidated by going up against Sebastian Coe? No, bring it on!"

He later led London's successful bid for the 2012 Olympics and was subsequently made chairman of Games organiser Locog.

The 57-year-old said: "I spent the best part of 10 years preoccupied with the planning and delivery of London 2012.

"Not once did I imagine that less than two years later I would find myself back at the park competing.

"I hear John Bishop has quite a competitive streak but I know these venues inside out - something that, probably unrealistically, I am hoping will play to my advantage."

In 2012, Bishop completed a five-day challenge to cycle, row and run the 290 miles from Paris to London in aid of Sport Relief, a feat he described as "the biggest physical challenge of my life".

The 2014 Sport Relief Weekend takes place from 21-23 March and money raised will help some of the poorest and most disadvantaged people in the UK and around the world.

You can book your tickets to be in the audience at Lee Valley Velopark or the London Aquatics Centre for the Clash of the Titans by going to the Sport Relief website.