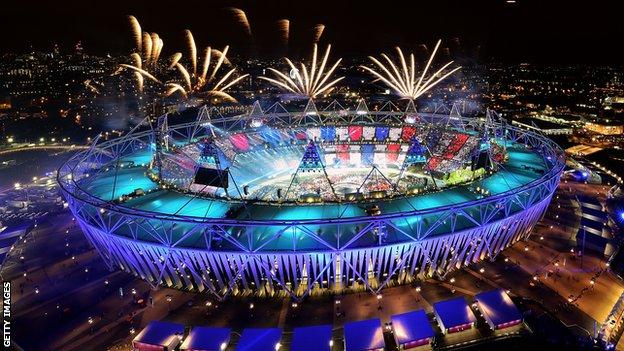 Listen to Gemma's BBC Radio 1 documentary on the BBC iPlayer.

Last year the eyes and ears of the world were on London as it hosted the Olympic Games.

The mantra of the Games was to create an Olympic legacy to "Inspire a Generation", making sure that sport is accessible for everybody.

But there are still lots of barriers to young people in sport: money, gender and family - and how about just trying to be a normal young person? How do you balance training, school work and your social life?

I've been able to look into these issues for a special BBC Radio 1 documentary as part of the Radio 1 Stories documentary strand.

Making the documentary was a great learning experience as I heard from Usain Bolt, Mo Farah, Jessica Ennis-Hill, Greg Rutherford, Gemma Gibbons, the Brownlee brothers, Karina Bryant and quite a few more about what it takes to make it to the top of the podium.

But I also discovered how hard it is to grow up attempting to become an elite athlete, thanks to the touching stories of four people who are smashing down barriers to follow their Olympic dream.

There's Aaron Turner, a 21-year-old judoka who struggles to make ends meet with the cost of training.

Kyle Powell is a T45 Paralympic sprinter who had to move away from his friends and family to give himself the best shot.

Mercy Brown is a female weightlifter from Tower Hamlets, making her way in a sport that is traditionally dominated by men.

And finally, Dan Neilson, a showjumper who used to box and play football but now loves this unconventional sport for a 21-year-old.

But the Olympic impact wasn't only felt by elite athletes - you didn't even have to be good at sport to be inspired.

A couple of months ago I found myself in the unlikely scenario of doing a 10K run.

Stomp, stomp, stomp, I pounded along, desperate for it to be over, but not stopping nevertheless. My only training had been momentary jogging spurts, (endorphin chasing, I call it), a 'one lap' jog around my local patch of grass.

To give myself the tiniest bit of credit, I do sometimes go to the gym - my trainer their calls me 'Bambi' as my balancing ability is abysmal.

Some people at the gym think I'm unhinged because I'll often be vocally repeating the mantra of finding life's 'balance'. But I figure that if the joy I find in food can be matched by an hour's exercise and wipe out the post-indulgence guilt, then why not try?

Despite being terrified on the day of my 10k, I was invigorated by how many people had signed up to do it. It lifted me and forced me not to stop.

The velocity of sport in numbers I find giddy. There is a new high to be found in looking after yourself and engaging in sport and fitness.

In the UK 1.4 million more people are playing sport regularly since the bid to host the Olympics was won in 2005. If there was a 'well-being revolution' gently rumbling along over the past five years, then last year's Olympics jolted us all into action.

Sport became the new rock 'n' roll, with its stars our new idols. Glitzy, loud, and unpredictable. Glamour and spandex in abundance.

This revolution swept me up unexpectedly. I didn't know how much sport could connect with us normal, crisp-munching human beings. Having reached the end of my 10k hot, sweaty but exhilarated, I now know.

Whether an elite athlete or a novice like me, I hope you enjoy my documentary and if you feel the tiniest bit inspired, you can find out how to get involved in sport near you by going to bbc.co.uk/getinspired … just don't forget your spandex!

Listen to Gemma's BBC Radio 1 documentary on the BBC iPlayer