The term martial arts covers such a large number of different sports, there is sure to be one discipline that appeals to you.

What all have in common is the benefits you can gain to your fitness and confidence.

The scope is vast, so if you're thinking of getting involved but don't know were to start, explore this online directory of martial arts clubs to find your nearest club. 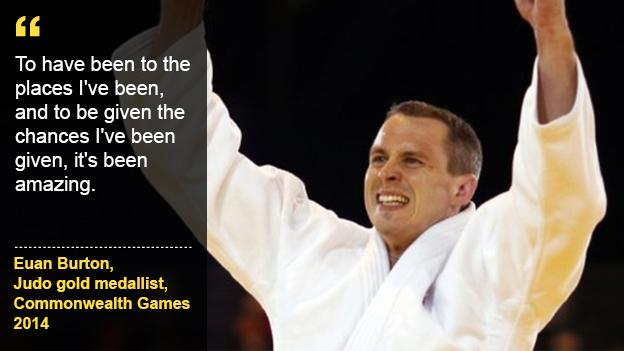 Euan Burton served as his country's flagbearer before the Glasgow games, and retired shortly after securing his gold medal.

Judo roughly translates as 'gentle way' in Japanese, and though it can appear to be anything but gentle, it's skill, technique and timing that will see you gaining different colour belts as you improve.

Judo is one of two martial arts included in the Olympics, and it is easy to try it, with all clubs registered with the British Judo Association offering free starter sessions and 'judo gi' (uniforms) to borrow.

Use their club finder to get started, or try the NI Judo, Judo Scotland and Welsh Judo websites.

The second Olympic discipline, taekwondo requires effective self-defence, strength development and cardiovascular fitness, all developed through a combination of mental and physical training.

More than 50 million karate practitioners worldwide can't be wrong, can they?

Though it involves physical moves such as punches, kicks, knee and elbow-strikes, karate is revered for teaching supreme levels of self-discipline and self-control - the mind is just as important as the body.

The term 'martial arts' derives from Latin, meaning 'arts of Mars' - the Roman god of war.

Though it's a tough, close-contact combat sport, ju-jitsu centres on the principle of using an opponent's energy against them, rather than directly opposing it.

This manifests itself through a series of clever techniques, which are crafted over time.

Take note: although the accident rate is low, it's wise to have a licence. Find your local club at the British Ju-Jitsu Association website.

For anybody, taking up martial arts can improve one's health and promote a greater sense of self-worth and wellbeing.

The Disability Martial Arts Association is a wide-ranging support network which fundamentally believes that people come first and disability is second.

They have a comprehensive database of all Martial Art Clubs and Associations that cater for people with various disabilities.

In many disciplines, to become an instructor means being highly qualified - but not in all. Volunteering opportunities do sometimes arise, for example, in helping people learn tai chi.

The Disability Martial Arts Association runs a programme on how to provide martial arts participation opportunities for a wide range of disabilities that people have. You can also try Sports Coach UK for coaching opportunities.

Find out about volunteering opportunities in England, Scotland, Wales and Northern Ireland.Join In UK can also help you find a club that needs your hands on attention.

1. Or find your local kickboxing club via this online directory of clubs.

Are you inspired to try martial arts? Or maybe you are a keen enthusiast already? Get in touch and tell us your experience of the activity by tweeting us on @bbcgetinspired, visiting us on Facebook or email us on getinspired@bbc.co.uk.