If you've always fancied yourself as an expert sword fighter like in the movies, then fencing could be for you.

The sport is great for all-round fitness, muscle toning, building core strength, co-ordination and balance. Since you need to make lightning-fast decisions, it is also excellent for concentration and focus.

People of all ages can compete in the sport. At the Olympics, Sophie Lamon of Switzerland won silver in the women's epee team at the 2000 Games when aged 15, and Austrian Karl Munich competed at the 1912 Games at the age of 64. 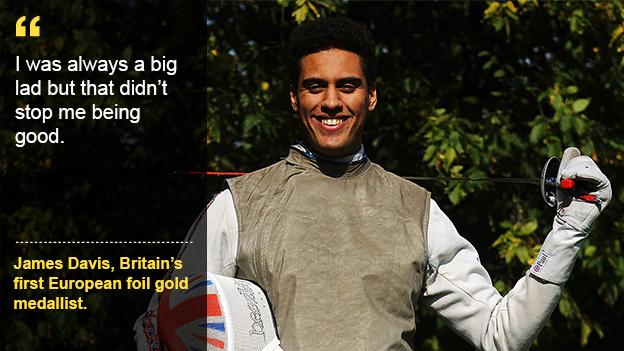 James Davis reached a career high world ranking of fifth ahead of the Rio Olympics.

Fencing is a fast, dynamic and explosive sport and there are more than 300 clubs in the United Kingdom you can contact to arrange training and matches.

There are three forms of fencing, each with a different weapon and rules, the foil, sabre and épée. Most competitive fencers choose to specialise in only one weapon.

British Fencing's GO/FENCE scheme replaces the traditional metal sword with plastic and foam versions to allow an introduction to be cheaper, quicker and safer.

GO/FENCE uses a different target area and only a plastic mask is required instead of the usual special protective clothing when metal swords are involved.

Fencing with metal swords should never be tried unless supervised by a qualified trainer and the correct clothing is worn.

Take the first step by finding and club near you in England, Scotland, Wales and Northern Ireland.

The British Disabled Fencing Association (BFDA) is the best place to go for all disability fencing information.

Wheelchair Fencing is an inclusive version of the sport very similar to the able-bodied version and can be as intense and ambitious as you want it to be.

The BFDA have information for everyone - from those aiming to become Paralympic champion, or those after a regular workout among friends.

Equipment can be provided for beginners and the BFDA website has information on what to buy and where to get it from.

Fencing is one of only four sports to feature at every modern summer Olympic Games.

As well as Go Fence sessions youngsters can also get into fencing through Change4Life (C4L) fencing clubs in secondary schools and further education colleges across the country.

These clubs are aimed at 13-19 year olds and hope to attract young people who might have been inspired by the Olympic and Paralympic Games to take up and participate in fencing.

Fencing, like most sports, requires a number of volunteers to help it run on a daily basis and clubs are always in need of your help.

For more information on the courses available click here or visit your local club and get involved.

Are you inspired to try fencing? Or maybe you are an enthusiast already? Get in touch and tell us your experience of the game by tweeting us on @bbcgetinspired or email us on getinspired@bbc.co.uk.