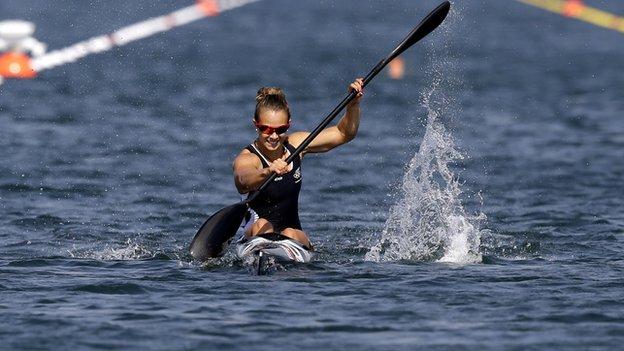 Canoe sprint events have been part of the Olympics for more than 75 years. Taking place on still-water courses, they are simple head-to-head races without gates or penalty points to contend with.

Kayak races are listed with a 'K' and canoe races with a 'C' - so the Men's C2 1000m event, for example, is simply a two-man canoe race over 1000 metres. Both disciplines recently introduced new 200m sprint races, which promise about 30 seconds of explosive action.

As for the difference between a kayak and a canoe, kayak racers sit in the boat and use a paddle with two blades, while canoe athletes kneel and use a single-bladed paddle which they switch from side to side.

Paddling uses most of the muscles in the arms and legs, with the strain of fighting against the power of the water leading to an increase in upper arm, forearm and chest circumference and grip strength. An hour's canoeing burns approximately 287 calories.

As the canoe sprint relies on technique and strength, competitors often remain competitive at an age when most other athletes have retired.

Italian Josefa Idem claimed silver in the K-1 when aged 43 at the Beijing Olympics in 2008, while the most famous competitor of all is the German Birgit Fischer, who won an incredible eight gold and four silver medals between 1980 and 2004.

If you haven't canoed before, a starter course is a good idea. There are clubs and watersports centres all over the United Kingdom, with some offering teaching for mixed groups or for novices.

For those looking to join a club or begin lessons, visit the The British Canoe Union website for further information. You can also contact the BCU to find out the location of sprint meets.

If you are new to canoeing and kayaking, it is not necessary to purchase equipment straight away.

Very often clubs and centres will have equipment that you can use, under supervision.

After you begin to paddle more regularly you may then wish to purchase some of your own equipment such as a helmet, spray deck, buoyancy aid, paddle and even a canoe.

From entering the sport as a beginner it is possible to progress to national regattas at junior and senior level, where all paddlers are ranked within their classes.

There are approximately 4,500km of navigations and canals in the UK that can be paddled on with the appropriate licence. Whitewater centres also offer a variety of exciting sporting and team-building activities.

Canoe sprint at the Olympics

The kayak is thought to have originated from Greenland as a tool for hunting, fishing and transportation, while the canoe was used all over the world as a method of transportation, trade and war.

Canoe sprint, as opposed to slalom, has been the traditional form of racing since the sport's inception during the mid-19th Century.

Flatwater canoeing featured at the 1924 Games as a demonstration sport before canoe sprints officially entered the Olympics in 1936. Women have competed in the kayak event only since the 1948 Games in London.

Are you inspired to try Canoe Sprinting? Or maybe you are an enthusiast already? Get in touch and tell us your experience of the activity by tweeting us on @bbcgetinspired or email us on getinspired@bbc.co.uk.