Monaghan trailed by seven at the break but they closed the gap despite the dismissals of Fintan Kelly and Dermot Malone early in the second half.

Eoin McHugh's second-half goal helped Donegal to victory over a Cavan side which also finished with 13 players.

Tyrone, Donegal and Monaghan lie a point behind leaders Dublin.

Sean Cavanagh came off the bench to guide the Red Hands home with three late points, fending off a battling Farney outfit.

The visitors out-scored their opponents by eight points to five after the two red cards.

Tyrone pile on the points

Conor Meyler, Tiernan McCann, Darren McCurry and Frank Burns were all on target from distance as the home side established control early on.

And they were awarded a penalty in the 10th minute for a foul on Mattie Donnelly, but Peter Harte sent his kick just wide.

When Jack McCarron finally opened his side's account in the 25th minute, it looked as if Monaghan could find some rhythm, but Tyrone immediately got back on top with McCann landing his second, and Harte kicking three, two of them from frees, the other a spectacular effort from distance.

Tyrone led by 0-9 to 0-2 at the break and Monaghan went down to 13 men with the double dismissal.

But they responded with courage, playing like men possessed, displaying incredible resilience and intensity to take the game fearlessly to Tyrone.

Goalkeeper Rory Beggan arrowed over a couple of long range frees, and a fabulous fetch and point from Kieran Hughes, now pushed up to full forward, narrowed the gap to three points.

Sean Cavanagh's introduction was crucial for a Tyrone side just hanging in there, with the former Footballer of the Year hitting three vital scores, two of them spectacular efforts from play, to steady the ship.

Monaghan continued to fight back, with points from McManus and McCarron, but the Red Hands held on.

It was much easier for Donegal at Breffni Park, with Michael Murphy hitting the first two of five straight opening points from the visitors. 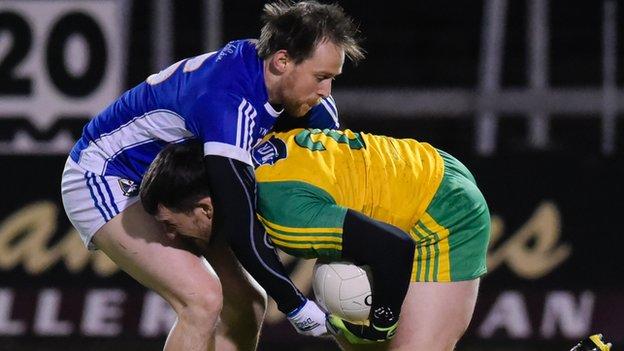 Cavan clawed their way back into the game but suffered a massive blow when Killian Clarke was sent-off for a poor challenge on Eoghan Ban Gallagher late in the first half.

Donegal held a 0-6 to 0-4 advantage at the interval and Hugh McFadden increased the gap before Eoin McHugh blasted in the only goal.

The hosts had already used all their substitutes when Cian Mackey was black-carded in the dying minutes.