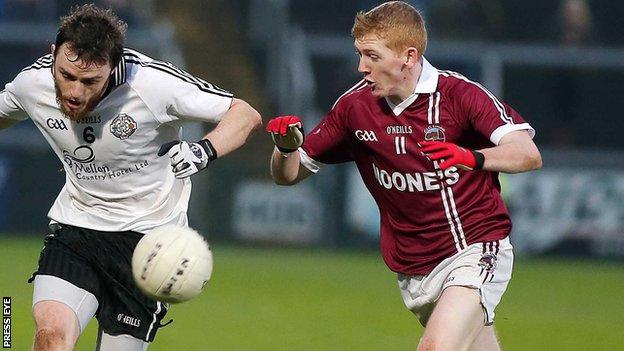 Christopher Bradley landed the winning score in stoppage-time as Slaughtneil clinched a 1-10 to 1-09 victory over Omagh in Sunday's Ulster Club final.

The Derry side had been three points down at half-time but had the better of the second period to snatch their first ever provincial football championship.

Slaughtneil had a dream start with a Cormac O'Doherty goal after 50 seconds.

Omagh recovered to level the game and were 1-5 to 1-2 up when Barry Tierney scored a 28th-minute goal.

"It was not our best performance but a magnificent point at the end won it for us," said Slaughtneil star Chrissy McKaigue.

"Omagh are a well-drilled and fit team, and we were not happy at half-time."

Both teams were making their maiden appearance in the provincial decider and a close encounter was anticipated.

It was slight favourites Slaughneil who got off to the ideal start by finding the net in the first minute.

The Omagh rearguard was caught out by a high ball and corner-forward O'Doherty got in behind the defence to fire a well-struck finish into the net.

Aaron Grugan, out on the right, landed a superb effort for St Enda's but Gerald Bradley replied in equally impressive style for the Tyrone champions.

St Enda's captain and corner-back Hugh Gallagher advanced to cap a fine move with an accurate finish and then county star Joe McMahon converted the score which levelled matters at 0-5 to 1-2.

The Omagh side were now on top and secured the goal which gave them a three-point interval advantage.

Conan Grugan surged forward and fed Tierney who produced a classy finish into the top corner for his third goal in three Championship matches.

Tierney then bagged the first point of the second half to extend the gap to four points.

Slaughtneil, however, were not to be denied and Barry McGuigan, Cormac O'Doherty and Ronan Bradley hauled them right back into it.

But Mickey Moran's men still had the momentum and four straight scores saw them regain the lead.

Ronan O'Neill's free meant the contest was tied going into two minutes of stoppage-time and it was Christopher Bradley who grabbed his moment of glory with the last-gasp winner.

In the preceding Intermediate club final, County Down side Warrenpoint beat Inniskeen of Monaghan by 1-14 to 1-07.