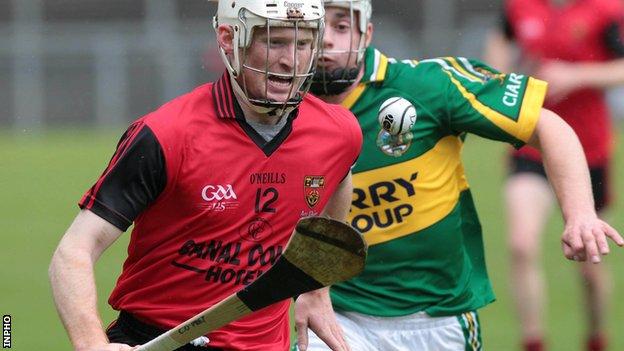 Down cruised to a 1-31 to 0-10 win over Donegal at Clones to set up an Ulster SHC semi-final with Derry.

The Oak Leafers secured a 4-16 to 3-13 victory over Armagh in Sunday's other quarter-final at the Athletic Grounds.

Donegal were no match for a Down side that was in complete control for all but the opening quarter.

Conor O'Prey scored the only goal of the game, while Scott Nicholson hit seven classy points from play.

The Tir Chonail men stayed with the Ardsmen for 20 minutes, with Ciaran Mathewson, Michael McGee and Paddy Hannigan finding the target.

But Down were able to pick off scores with relative ease from long range, Scott Nicholson, Conor O'Prey, James Coyle and Johnny McCusker splitting the posts.

Gerard Monan's side stepped up the tempo late in the half, with Conor Woods, Coyle and Nicholson applying stylish finishes to enterprising approach play.

Donegal were awarded a penalty in the 28th minute, but Mathewson, restricted by the new directive, saw his effort comfortably saved by goalkeeper Stephen Keith.

And Down struck for a goal four minutes later, O'Prey fetching a long delivery before rounding his marker and planting the ball in the net past Paul Burns.

Midfielder Nicholson brought his tally to five, all from play, to help Down to a 1-16 to 0-7 interval lead.

Woods, Dineen, Nicholson and O'Prey added further to Down's mounting tally, and within 13 minutes of the restart, they were 17 points clear.

Donegal scored just three points in the second half, completely over-run by a Down team still playing within themselves.

Nicholson's tally rose to seven, all from play, while McCusker finished with six, while sub goalkeeper Dylan Lavery prevented further damage with a double save from Coyle.