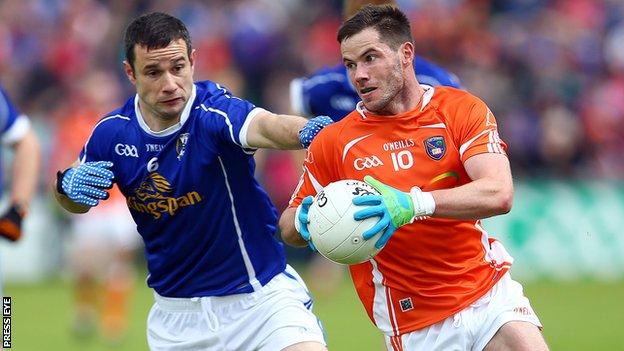 Armagh produced a committed display to beat a poor Cavan side in the Ulster SFC but the game was marred by a mass brawl which broke out before the start.

Cavan's Martin Dunne was injured in the fracas and Armagh quickly took control to lead 0-5 to 0-2 at half-time.

Armagh should have been out of sight by the break but showed more composure to extend their lead to 0-9 to 0-3.

Cavan hit the next three scores but Caolan Rafferty's 53rd-minute goal made the game safe for the Orchard men.

The Breffni County clearly came out of the pre-match brawl worse off as Dunne's injured further weakened an attack already minus influential Cian Mackey, who was unable to start because of a knock.

But even the absence of the duo for the majority of the contest - Mackey was introduced at half-time - cannot be an excuse for the poor Breffni display during the 73 minutes of action.

Armagh's appetite proved too much for the Cavan side as the Orchard men had impressive performers all over the field.

Defenders James Morgan and Charlie Vernon were among the stars as they shackled Keating and the other Cavan attackers for the most part with the two Raffertys, Ethan and Caolan also excellent.

But Armagh had heroes all over the pitch and what will probably please Paul Grimley and Kieran McGeeney the most was that it was not just a case of Armagh relying on Jamie Clarke to produce the goods.

The brawl appeared to break out after the Armagh team lined out behind the Cavan flag during the pre-match parade but whatever the cause, what followed were scenes which will have to be investigated by the GAA authorities.

Virtually all the players appeared to be involved in the disturbances, which forced young members of the St Michael's Enniskillen band providing the musical accompaniment, to scurry for cover as fists began to fly in all directions,.

As had been predicted after last year's defensive debacle, the Orchard rearguard was a much improved unit 12 months on as the Cavan forwards were given precious little time and room.

The Cavan forwards didn't have much possession to start with as Armagh took an early stranglehold in the middle third of the field.

But with Armagh posting some poor early wides, Cavan managed to lead 0-2 to 0-0 despite their limited possession as Keating notched a couple of frees.

Stefan Campbell and McVerry wasted Armagh goal chances before the break but despite bringing up their wides tally to 10 by the 25th minute, the Orchard men finally found their range to move 0-5 to 0-2 ahead by the break, helped by two Clarke points and a McVerry free.

Cavan fans must have hoped that Armagh would be made to pay for their first-half profligacy in the second period but the pattern of Orchard domination, for the most part, was maintained after the resumption.

The busy Mark Shields extended Armagh's lead and Campbell then thought he should have been awarded a penalty when he was bundled over before firing his goal chance wide.

But undaunted, Armagh hit three of the next four scores to extend their lead to 0-9 to 0-3 although they did have an escape as Philip McEvoy had to save a Keating shot after a high ball into the square.

As David Givney and Gearoid McKiernan finally began to make an impression in midfield, Cavan threatened a revival as three unanswered points left only a kick of the ball between the teams with 19 minutes left.

However, the brief flicker of hope for Cavan was totally extinguished in the 53rd minute as Caolan Rafferty netted from close range after latching on to a mishit shot from Clarke.

Aaron Kernan had been introduced for Shields early in the second half and his three points helped increase Armagh's advantage in the closing stages as the match ended in something of a whimper.

Ethan Rafferty was dismissed in the dying seconds after getting a black card on top of a yellow card.

But for once, the black card issue was not the main source of controversy on this particularly day as the early brawl left the GAA's disciplinary authorities facing potentially a couple of late night sittings.