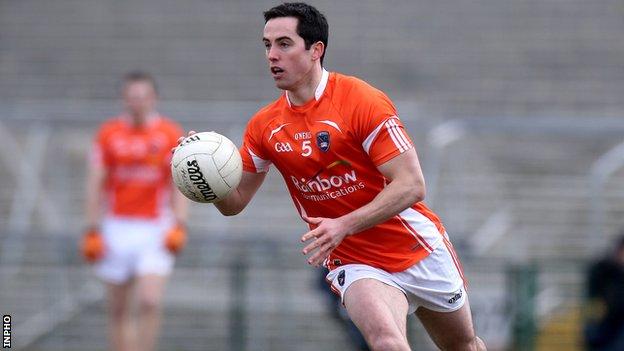 Aaron Kernan is the notable absentee from the Armagh team announced for Sunday's Ulster SFC quarter-final against Cavan although Brendan Donaghy has been passed fit to start.

With Donaghy named at centre-half back, Ciaran McKeever and Mark Shields occupy the wing-back slots.

Kernan has been bothered by a hamstring injury and it will be a shock if he doesn't get some action on Sunday.

His brother Tony is a surprise omission from Paul Grimley's team.

Caolan Rafferty, Kevin Dyas and Eugene McVerry are named in the half-forward line with Jamie Clarke joined by Ethan Rafferty and Stefan Campbell in the full-forwards.

Kieran Toner is joined at midfield by Aaron Findon with Stephen Harold missing out on a starting role.

Charlie Vernon is joined by Andy Mallon and fit-again James Morgan in the full-back line.

Donaghy has been out of action for six months because of tendonitis and it's possible that he could switch to full-back.

Aaron Kernan suffered a torn hamstring in late April and looked to be a major doubt for the Ulster tie.

However, he has been able to resume training and should be in contention for Sunday's game.

Kernan missed Crossmaglen's Ulster club campaign and the Football League with Armagh as he took an extended break to avoid serious Achilles damage.

The half-back did make his return to action in the middle of April but suffered the hamstring injury in his second match back.

Cavan, meanwhile, have named their side with all 15 players having sampled Championship football before.

Gearoid McKiernan, who missed last year's Championship because of injury, plays in midfield alongside David Givney.

Cavan defeated Armagh 1-15 to 1-11 in last year's Ulster Championship as Grimley's tactical approach of operating without a sweeper came in for criticism.

With Grimley now joined on the sideline by Kieran McGeeney, it will be a surprise if the Orchard team is not set up in a more defensive way.