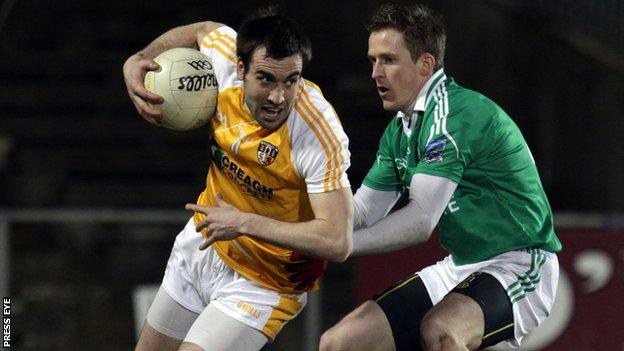 Fermanagh manager Peter McGrath believes his squad has the quality to make an impact in this year's Ulster Football Championship.

The Erne County open their campaign against struggling Antrim on Sunday and McGrath says his team's belief could be the key to the Brewster Park result.

"I like the cut of a lot of the players on this panel," says McGrath.

"Maybe it's about convincing them they are as good as a lot of the players I have worked with over the years."

Former Down All-Ireland winning manager McGrath faced a game of catch-up after only being appointed to the Fermanagh job in November.

After surveying the talent the available to him in a series of trials and challenge matches, McGrath quickly came to the view that the most productive route for Fermanagh football was to trust in youth.

Young players in line to start on Sunday include the Cullen brothers Che and Lee plus Ryan Jones and Richard O'Callaghan, who is being tipped to former a midfield partnership with talented captain Eoin Donnelly.

Tiernan Daly would also probably be set to start but for a hamstring injury, which is likely to rule him out.

"The safe thing would be to go back to the tried and the tested players who maybe didn't get you where you wanted to be in the past," added McGrath, who is managing a county team that hasn't earned an Ulster Championship win since 2010.

"There is no point in revisiting that. You should be more adventurous and look to the future and show confidence in younger players."

McGrath went into the League campaign hoping that he would be able to get the best out of the mercurial Seamus Quigley, unlike a number of previous Erne bosses including most recent incumbent Peter Canavan.

But it was to prove beyond the Rostrevor man as Quigley walked off the panel, along with his two brothers Sean and Conor, following a training ground dispute in March.

While Seamus had apparently burned his bridges with McGrath, efforts were made behind the scenes to coax the other two brothers back into the panel and Sean, arguably the most influential of the trio, did return earlier this month.

Quigley looks likely to take his place in a full-forward line this weekend which may also include veteran Barry Owens on the edge of the square.

Antrim have also had some upheaval in the build-up to Sunday's game with St Gall's trio CJ McGourty, Michael Pollock and Chris Kerr quitting the squad six weeks ago.

Kevin Niblock is likely to start in the half-forward line after his brief soccer stint with Cliftonville while the attack is also expected to include the two McCann brothers Michael and Tomas after their falling out with previous manager Frank Dawson last year.

Manager Liam Bradley has several other talented players at his disposal including Justin Crozier and Niall McKeever, following his return from his Australian Rules career.

However, Antrim displays in Division 4 of the Football League were dreadful and the departure of the St Gall's trio apart, the squad is largely unchanged from the Spring.

It's likely that Fermanagh's largely young side - burdened by favouritism - will be nervous at Brewster Park but with McGrath in their corner, the Ernemen will be expected to set up an Ulster semi-final against Donegal.