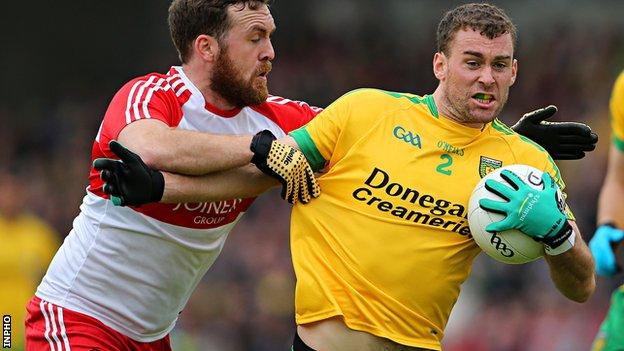 Donegal fought back from three points down in the first half to battle past Derry in Sunday's Ulster SFC match.

Patrick McBrearty missed a Donegal goal chance and Derry led 0-6 to 0-3 before a Michael Murphy point reduced the margin to two after a poor first half.

The key period was the third quarter as Donegal hit 1-5 without reply as Leo McLoone netted a superb goal.

Derry cut Donegal's lead to two but the visitors held on for a deserved win as James Kielt was sent off late on.

Donegal manager Jim McGuinness will look back on a job well done as his side were able to largely subdue Derry's star players Mark Lynch and Sean Leo McGoldrick during the contest.

Karl Lacey conclusively won his individual battle with Lynch as the 2012 player of the year produced his best performance since the All-Ireland final success over Mayo 19 months ago.

The theory that if Lynch is curtailed, that this Derry team will struggle appeared the case once again as the Oak Leafers lacked the penetration to breach Donegal's massed defence.

The first half resembled a bad game of Rugby League with the slow ponderous build-up and lateral passes the order of the day.

Derry were winning the midfield battle for the most part - despite the early withdrawal of Fergal Doherty because of a back injury - but the goal chances that came were being created by Donegal.

The teams had only managed a point apiece by the 10th minute when McBrearty blazed a glorious opportunity wide after a clever pass form the industrious Anthony Thompson.

Boosted by the escape, late inclusion Emmet Bradley stroked over a magnificent point from near the sideline to edge Derry 0-3 to 0-2 ahead on 19 minutes.

Lacey did sortie upfield to equalise a minute later but Derry responded with unanswered scores from Doherty's replacement Niall Holly, Bradley and Ciaran McFaul as the Oak Leafers had the best period of the match.

After Murphy responded with a free, there followed one of the key moments of the match in first-half injury-time as Derry wasted a potential goal chance as Holly took the wrong option in attempting to pass to McGuckin after the Donegal defence had been left exposed.

Derry did look to have the slight edge at the break as they led by two but that advantage had disappeared within four minutes of the restart after a Thompson point was followed by McLoone's goal.

The goal harked back to Donegal's running game of two years ago and Murphy won ball in midfield, found a charging Frank McGlynn who then passed for McLoone to deliver a delightfully-lofted finish over Thomas Mallon.

Murphy knocked over a further point within 60 seconds and the sense that the match was slipping away from Derry increased when wing-back Kevin Johnston's goal attempted was brilliantly blocked by Neil McGee at the other end of the field.

Three further unanswered points followed over the next eight minutes as Donegal suddenly looked in total control at 1-9 to 0-6, with Martin McElhinney and Neil Gallagher by now on the field, after being late withdrawals from the starting line-up.

Murphy's 47th-minute score from the sideline was reminiscent of Maurice Fitzgerald's famous effort from the 1997 All-Ireland Final as the Donegal captain was starting to more of an impact after being released from the midfield duties which had shackled him in the first period.

Derry outscored Donegal 0-5 to 0-2 in the final 23 minutes of play but never really threatened to score the goal which would have got them back into the contest.

Defender Gareth McKinless attempted to unlock the Donegal defence on one occasion with a clever pass towards McGoldrick but substitute David Walsh got back to concede a 45.

A dispiriting day for the Oak Leafers ended with Kielt's dismissal after yellow and black cards after he had only been on the field for 10 minutes.