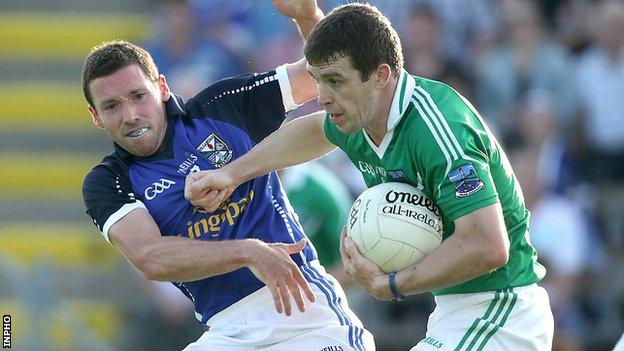 Fermanagh have been boosted by the return to training of Barry Owens and manager Peter McGrath continues to hope that the Quigley brothers Sean and Conor will return to the squad.

McGrath has confirmed that the other Quigley brother Seamus will not be returning to the squad following a training-ground row last week.

But the manager has left the door open for Sean and Conor Quigley.

McGrath is looking for clarity on their intentions before the end of this week.

Sean and Conor Quigley left Fermanagh training on the evening of 11 March following the disagreement involving their brother.

"Contact has been made and it is up to them," McGrath told the Irish News.

"But having said that we're not going to keep this as an open-ended issue.

"We can't be operating on a will-they-be-back scenario and the players can't be either. So it needs to be sorted out before the end of this week."

However, McGrath has made clear that their will be no route back to the squad for Seamus Quigley.

Owens had indicated that he would return to the squad at some stage during the Spring after family commitments ruled him out for the early stages of the Football League.

Eamonn Maguire has also resumed training with McGrath's squad after being unavailable because of work commitments.

Despite being without the three Quigleys, Fermanagh eased their Division 3 relegation worries with a nine-point win over Limerick at Newcastle West last weekend.

However, the Ernemen will need at least one win from their remaining two homes games against Wexford and Offaly to secure their Division 3 status for next year.