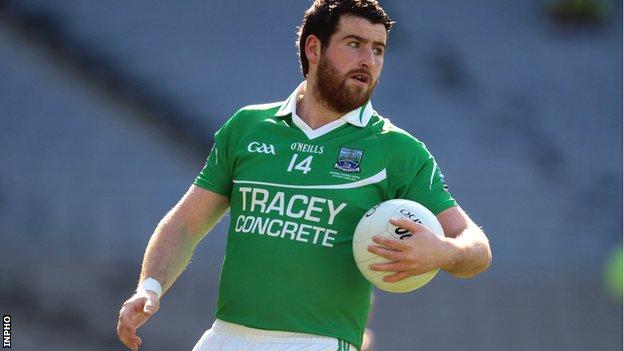 The three Quigley brothers have not been named in the Fermanagh team for the Football League Division Three game against Limerick on Sunday following their apparent walkout from the squad.

Reports on Thursday suggested that Seamus, Sean and Conor Quigley walked out of Tuesday's training session.

The county management have refused to comment on the issue.

None of the trio were included in the team for the Limerick game announced on Thursday evening.

Conor Quigley is replaced in the full-back line by Che Cullen with Ronan Ormsby and Brian Cox drafted into the Erne side in place of central attackers Sean and Seamus, with the forward line also including a couple of positional switches.

Seamus Quigley has fallen out with a number of previous Erne managers.

And the full-forward and another panellist Niall Cassidy were dropped for last month's Football League win over Sligo after playing in a junior soccer game on the same day as the Division 3 match.

However, Quigley played in the subsequent defeats by Longford and leaders Roscommon which dropped Peter McGrath's side into the relegation picture.

Sean and Seamus Quigley have been Fermanagh's top scorers during the league with Sean hitting 1-5 against Roscommon last weekend and Seamus contributing 2-1.

Fermanagh will go into Sunday's match at Newcastle West in dire need of a win after registering only two points from their opening four matches.

In a BBC interview in late January, McGrath acknowledged that relegation to Division 4 would represent a "disaster" in his opening season in charge.

McGrath also spoke of his belief that Seamus Quigley could make a "massive contribution" to the Erne squad.

"Seamus Quigley is now 25 or 26 and he has gone on record as saying that his ambition this year is to play for Fermanagh in the Championship against Antrim so he wants to last the course," said McGrath in the January interview.

"He would need to get a bit fitter maybe but in terms of doing the unexpected and being able to do things with the ball that others can't do, some of the scores that he gets are outrageous.

"It is my hope and wish that he sticks at it and that he gets himself into the best shape of his life."

However, some 10 days later McGrath dropped Quigley for his soccer indiscretion and it remains to be seen whether the mercurial full-forward, and indeed his brothers, are going to be involved for the remainder of the campaign.