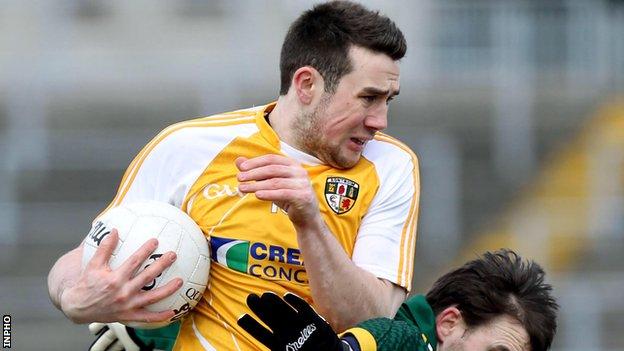 Antrim's promotion hopes suffered a major blow after Carlow scored with the last kick of the Division Four game to complete a 3-15 to 2-17 comeback win.

Kinsella levelled with a goal before Paul Broderick's last-gasp winner.

Cunningham was forced off with an injury in the first half with his replacement Kevin Niblock black-carded just two minutes after coming on.

Antrim made a superb start to the second half, Murray finding the net as they hit 1-4 without reply.

Gahan's goal reduced the deficit but the Saffrons still held a three-point lead with a minute remaining.

Kinsella grabbed his second goal to equalise and a 45 from Broderick won it for Carlow deep into injury time.