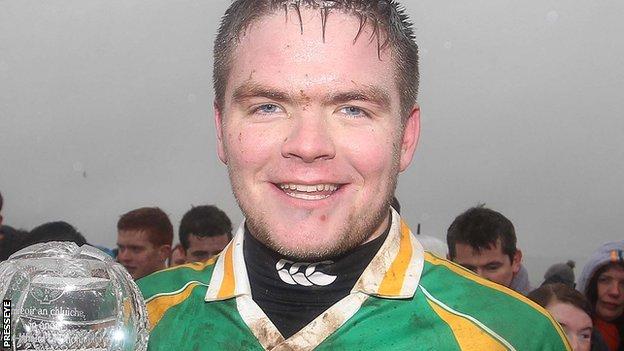 Paul Gunning scored two goals for St Pat's and Danny Tallon one while Conor McCarthy and Daithi Colton found the net for St Macartans at Armagh.

Maghera will face St Patrick's Cavan in the last four on Friday night (19:30).

St Patrick's Academy Dungannon will play the winners of the replay between Omagh CBS and St Colman's Newry.

St Colman's battled back however and scored eight points in a row, James Kearns levelling with two minutes remaining.

Oisin O'Neill scored a penalty for St Colman's in the first half, with Ronan McHugh slotting home an Omagh penalty 33 seconds into the second half.

Despite conceding an 11th minute penalty goal, converted by McCarthy, St Patrick's Maghera bossed their opponents for much of the rest of the game on Friday.

They took the lead when Gunning's attempt at a point dropped into the net in the 25th minute, shortly after Aodh Curran's long-range point had given St Macartan's a 1-2 to 0-3 lead.

The superb Tallon converted a point just before half-time and set the tone for the second half with an early point.

Although McCarthy pointed a free in response, Tallon lofted over another 45 to open up a 1-7 to 1-3 lead after 38 minutes.

His Glen clubmate Gunning then scored a stunning goal in the 43rd minute and there simply was no way back for Monaghan.

Tallon converted a penalty seven minutes from time, and Colton's goal a couple of minutes later was merely a consolation score on a night that Maghera's defensive formation stifled the game, allowing Tallon, Gunning and Convery to show their class up front.