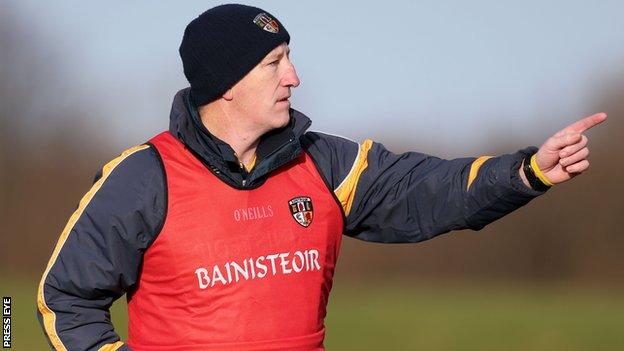 Antrim collapsed in the second half as Munster champions Limerick hit three goals to complete a 3-26 to 0-12 win in the Hurling League Division 1B game.

Limerick hit the opening four points with Conor Alis (two), Donal O'Grady and Tobin on target but Antrim responded with three of the next four points to cut the Treaty men's lead to only two.

Shiels's third score in the 20th minute cut Limerick's lead to 0-6 to 0-4 and while the home side moved 0-9 to 0-4 ahead, Darren Hamill and Niall McKenna points left only three between the teams.

But perhaps crucially, Alis hit the final two scores of the first half and Limerick took control in the third quarter as six unanswered points increased their lead to 0-18 to 0-8.

As Antrim's resolve appeared to wane, Reidy, Tobin and Hickey all found the net in the closing stages to give the scoreboard a somewhat flattering look for the home side after the first-half exchanges.

In the Division 2 games involving Ulster counties, Down made it two wins from two as they defeated Wicklow 1-15 to 0-10 at Ballycran, Derry hammered 12-man Westmeath 3-11 to 0-8 at Mullingar while Fingal beat Armagh 2-18 to 2-13 at Swords.

Paddy McCloskey scored Derry's first goal which helped them lead 2-8 to 0-4 at the break after Westmeath had already been reduced to 14 players.

Down's win leaves them on a maximum four points in Division 2B after two games.