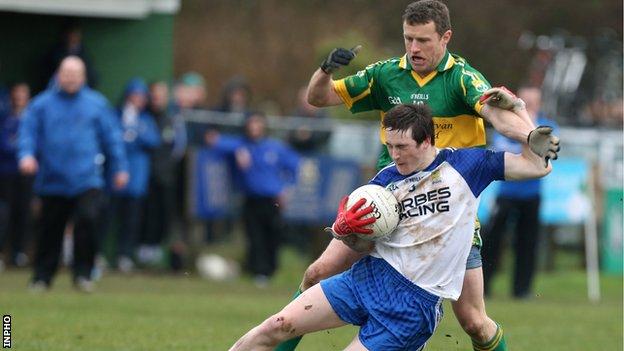 Ballinderry saw off a spirited revival from Kingdom Kerry Gaels to win 3-9 to 2-7 and qualify for the semi-finals of the All-Ireland Club Championship.

The Ulster champions looked to be going through comfortably but a late penalty scored by Kyle Holland meant the London underdogs trailed by just three points.

Collie Devlin scored two of the goals for Ballinderry who face Dublin side St Vincent's in the last four in February.

Daniel McKinless got Ballinderry's other goal in the match at Ruislip.

The task for underdogs Kingdom Kerry Gaels was made more difficult when they had full-back Peadar Stack sent-off for two yellow cards in the first half.

In the end it was closer than Ballinderry boss Martin McKinless would have liked and he was relieved to get through.

"The pitch was poor, the facilities were poor and we were out of our comfort zone," he said after the final whistle.

"But we came here to get a result and now we are in an All-Ireland semi-final. That is what we set out to do."

Ballinderry eased into a 1-5 to 0-1 lead by the interval, thanks in no small measure to some poor free-taking by Kingdom player Lloyd Colfer.

The Wexford man was off target with a number of decent opportunities, although he did land the home side's only score of the first half.

Ryan Bell set up Devlin for the opening goal in the eighth minute, with the visitors also getting points through Bell, Conleth Gilligan, Dermot McGuckin, Devlin and Daniel McKinless.

Ballinderry netted their second goal when Bell intercepted a slack pass and found Collie Devlin who played it over for McKinless to flick into the net.

However, Devlin then got his second goal for Ballinderry and that looked to be that.

Kingdom Kerry Gaels finished strongly and got their first goal when Brown followed up after Shamrocks keeper Michael Conlan had saved.

Alan Dillon, Timmy O'Sullivan and Ciaran McCallion added points before the hosts got a second goal through a Holland penalty.

That left just three points in it, but Conor Nevin and sub Fintan Bell scored the last two points to settle Ballinderry nerves - and the contest.