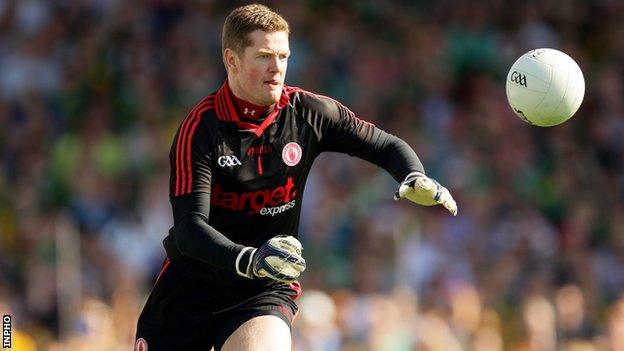 Tyrone keeper Pascal McConnell has decided to retire from inter-county football after a career which included three All-Ireland winning medals.

McConnell made his decision over the weekend but admitted he had been considering it for a number of months.

"It was in my mind that 2013 was going to be my last season at this level," said the Newtownstewart man.

"I had mentioned it to John Devine that this was my last year. I intended to enjoy it to the full and I did."

"There is a big commitment required in order to stay performing at the top level and I feel the time is right to bow out and start a new chapter in my life."

As well as winning the Sam Maguire three times he also pocketed four Ulster senior medals, something that he couldn't have imagined in his wildest dreams.

"If someone had told me back at the beginning of 1998 that I would go on and win all that with Tyrone I would never have believed them," he admitted.

"Those successes at youth level though were vital as there was no fear within that group of players when they got to senior level. When we got to Croke Park for the big games we expected to win and that was a major factor in us winning so many titles.

"I have absolutely no regrets from my playing career with Tyrone although I suppose if I was a bit greedy I would say that I felt that we could have won the All Ireland in 2009 and 2010."

While Pascal was substitute in the breakthrough Sam Maguire triumph in 2003, two years later he was between the sticks when the Red Hands overcome Kerry in the decider and he was also in goals in Tyrone's last triumph in 2008, a day that was bitter-sweet for him.

"2005 will always be special as I won my first senior All Ireland in goals but from a performance point of view the 2008 decider was probably my finest hour.

"It was a game that was tinged with sadness with John (Devine)'s father passing away the day before and I only found out the evening before that I would be playing. That win was for him and his family."