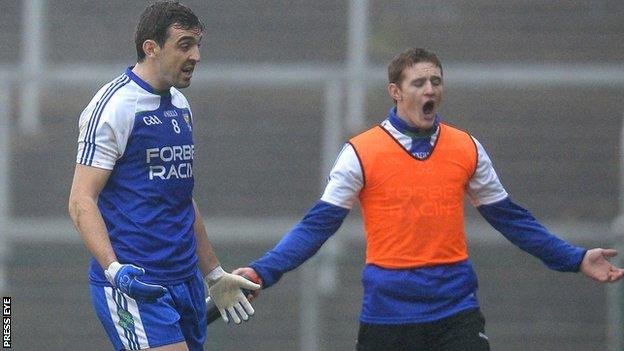 At a meeting on Thursday, Ulster GAA disciplinary chiefs downgraded the red card punishment to a yellow one.

Former Derry captain McGuckin was dismissed after a clash with Ryan Johnston in the incident-packed match, which Ballinderry won 1-10 to 0-9.

It means he can play in the Ulster final against Glenswilly on 1 December.

If McGuckin had been deemed guilty of striking, he would have been banned for at least four weeks.

The successful appeal means defender McGuckin is clear to play in the final at Healy Park in Omagh.

McGuckin appeared in person at the appeals hearing at Ulster GAA headquarters in Armagh.

The long-serving player said the outcome was a massive relief.

"I have been on egg shells for the past few days," he said.

"My full focus is now on the Ulster final against Glenswilly."

McGuckin had been shown a straight red card after referee Martin Higgins consulted a linesman about a clash with Ryan Johnston and it's believed Johnson appeared as a witness on McGuckin's behalf.

After the match at Armagh, Ballinderry manager Martin McKinless described the refereeing of the game as "very harsh".

"Players train all year for days like this and when a silly mistake by an official gets a man sent-off for petty stuff it's very frustrating.

"I didn't really see the incident involving Kevin but he says he didn't hit anyone and I'll take his word on that, he's a genuine sort of a fellow," said McKinless.