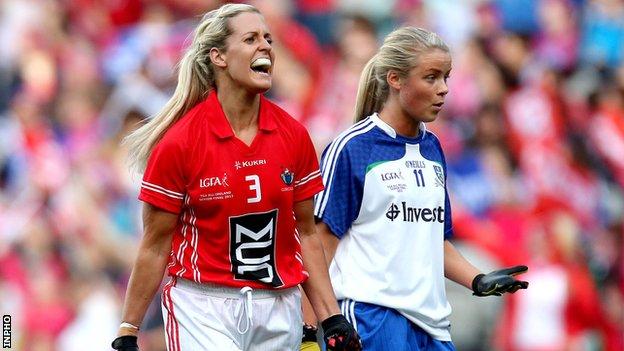 Valerie Mulcahy's goal helped Cork lead 1-6 to 0-6 at half-time but Monaghan keeper Linda Martin's penalty enabled them to move 1-8 to 1-6 ahead.

Monaghan still led 1-9 to 1-8 before Cork hit two points in a minute to lead with three minutes left at Croke Park.

Catriona McConnell missed a difficult last-kick free which would have earned Monaghan a replay.

McConnell had earlier scored four points and her huge disappointment was there for all to see as she fell to the ground in tears after her 35-metre free, which was into a strong breeze, sailed well wide.

It was McConnell who kicked the first score of the game for Monaghan, aiming to win the county's first senior title since 1998.

However, Cork hit four of the next five scores to lead 0-4 to 0-2 with impressive full-back Brid Stack curbing a lot of Monaghan's attacking forays and Valerie Mulcahy kicking two of the early Rebels points.

A fine effort from play from Monaghan skipper Therese McNally cut Cork's lead to the minimum but Stack's interception and run out of defence then started a move which culminated with Mulcahy's 15th-minute goal.

A fisted point from Juliet Murphy extended Cork's advantage to five and Monaghan missed a chance to cut the margin to two as McConnell's point-blank goal chance was brilliantly saved by Cork keeper Elaine Harte.

However, Monaghan responded bravely to outscore Cork by 0-3 to 0-1 in the remainder of the first period with two points from the impressive Caoimhe Mohan followed by another McConnell free.

Monaghan's improvement in the five minutes before half-time was continued after the restart as they hit an unanswered 1-2.

The goal came after half-back Cora Courtney had been fouled in the large square with Monaghan keeper Martin holding her nerve to slot low past opposite number Harte.

As Geraldine O'Flynn, Mulcahy and Deirdre O'Reilly all fired bad Cork wides, it seemed as though it was going to Monaghan's day before O'Flynn and Nollaig Cleary did finally find the target to level the contest against by the 43rd minute.

As both teams seemed out on the feet, there was a lull in scoring for 10 minutes before McConnell's fourth point edged Monaghan ahead again with seven minutes left.

However by that stage, Monaghan had been reduced to 14 players following Eileen McKenna's sin-binning for an over-zealous challenge on a Cork defender.

O'Flynn hit the Monaghan crossbar with a long-range effort and then missed a glorious chance after waltzing her way through the Ulster county's defence as Cork appeared to be blowing their chance to win an eighth title in nine years.

However, the Cork pressure eventually yielded an equaliser for Murphy in the 56th minute and they were ahead a minute later after another Mulcahy free.

Cork attempted to play keep ball in the closing two minutes as the clock ran down but Monaghan did regain possession in the final 30 seconds of play which enabled them to force their last-gasp free.

Given the swirling wind and the huge pressure on McConnell with only three seconds left, it wasn't a surprise to see her shot go well wide.