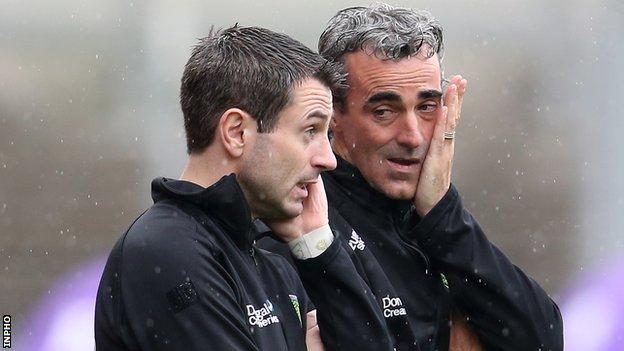 The Donegal GAA board has said that Jim McGuinness has agreed to remain on as the county's football manager for 2014.

McGuinness's position as manager had appeared in some doubt last month amid apparent differences over the scheduling of club games.

However, a Donegal statement on Saturday evening said that the county was "delighted to announce" that McGuinness had agreed to stay on.

After winning the Ulster title in his first year in charge in 2011, McGuinness led Donegal to provincial and All-Ireland titles last season but the 2013 campaign proved to be a disappointment.

Donegal suffered relegation to Division 2 in the Spring and their Ulster Final defeat was then followed by an All-Ireland quarter-final hammering by Mayo.

Last month, McGuinness told BBC Sport that the "conditions will have to be correct" for him to remain on on manager.

"The biggest thing for me is to be able to prepare the team properly," said the Donegal boss.

"I don't think we got that opportunity this year on some levels."

However, these difficulties now appear to have been ironed out with the county board reported to have agreed to McGuinness's request that no club championships matches should be played in 2014 until after the county exit from the championship.

McGuinness held talks with clubs about this issue last week before a vote was taken on the issue at Tuesday's county committee meeting.

The Glenties man is now a father of five after his wife recently gave birth to twin girls.

McGuinness has also been working as a performance consultant with Celtic Football Club in Glasgow since last November.