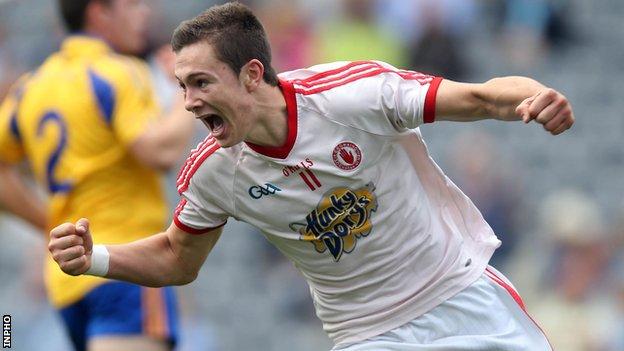 Conor McKenna inspired Tyrone to a stirring Croke Park victory and a place in the All-Ireland MFC final.

The Eglish lad smashed in a brilliant goal and scored two terrific late points as the Red Hands came from behind to win a thriller 1-12 to 0-13.

After two recent comeback wins, Tyrone will surely go into the decider against Mayo in confident mood.

McGann converted a free to make it 0-3 to 0-1 after eight minutes but McKenna narrowed the gap from a '45, and added a beauty from wide on the right, which was only awarded following consultation with Hawk-Eye.

McGann thumped over a terrific free, and Henry Walsh added a wonderful point from play from underneath the Cusack Stand as Fergal O'Donnell's side got back on top.

Roscommon could have had further scores, but were well placed at the break, ahead by 0-6 to 0-3.

But after going more than 20 minutes without a score, the Red Hands suddenly sprang to life, and McKenna smashed home a brilliant 39th-minute goal to bring them level.

Roscommon responded with a volley of scores that quickly restored their three points advantage, with Murtagh, Daly and Ultan Harney all on target.

Tyrone displayed their courage and mettle in the final 10 minutes, dispensing with the sweeper system to pile on the pressure, and McKenna rose to the challenge with two inspirational scores.

Tiarnan Donnelly and Christopher Morris also hit the target as they outscored their opponents by five points to one in the closing stages.