Charles Leclerc looked like a future world champion from very early in his Formula 1 career and that potential is becoming very real after his dominant victory in the Australian Grand Prix.

The 24-year-old Ferrari driver's second win in three races has moved him into a 46-point lead over the only man who at this early stage looks like a realistic title rival, Red Bull's Max Verstappen. There is a long way to go - 20 races still, in what is expected to be the longest season in F1 history - but the belief in Leclerc is starting to build.

Not the belief in his talent - that has always been there, and quite right, too, for Leclerc is one of the special ones - but in the possibilities within his car and his team.

Verstappen, meanwhile, realises he is already facing an uphill battle against a rival he has been racing on and off for 10 years and more, since long before they made it to F1.

The Dutchman's second retirement in two races - both from different problems related to the Red Bull's fuel system - has left him with a mountain to climb against a Ferrari team that looks stronger than it has been for years, perhaps even decades.

"We're already miles behind," Verstappen said. "I don't even want to think about the championship fight at the moment. It is more important to finish races."

Can anyone else enter the fight between them? Mercedes, remarkably, are second in both drivers' and constructors' championships, despite being a second off the pace after a poor start to the season. But already a title challenge from Lewis Hamilton or George Russell looks a long shot.

A copybook win for Leclerc

Leclerc started the weekend in Melbourne saying he expected the revised and faster Albert Park circuit to favour Red Bull. But he took pole position by the biggest margin anyone has yet had in 2022 and utterly dominated the race.

The Ferrari was quicker around the lap than the Red Bull, better balanced, faster in the corners and used its tyres more efficiently.

The only threat to his win came on the restart after a second safety-car period when he got some used rubber on his tyres trying for the optimum exit from the final corner and lost grip. But he fought off a brief challenge from Verstappen, and soon disappeared off into the distance again.

Leclerc is now 34 points ahead of his closest challenger in the championship - Russell - and has an advantage of almost two clear wins over Verstappen. He's saying the right things, the things all sportspeople say when chasing the big prizes, but he's well aware of the possibilities ahead of him.

"We are only at the third race so it is difficult to think about the championship," he said. "But we have a very strong car, a very reliable car too, and for now we have always been there.

"I hope it continues like this and if it does we probably have chances for the championship, which makes me happy after the last two seasons, which have been difficult for the team."

Leclerc's mindset 'is a bit different this year'

Leclerc's reputation before this year was of an abundantly fast and talented driver who had a tendency to make the odd mistake here and there which he would need to iron out if he was ever to fully challenge for the title.

He has never been shy of admitting weaknesses - to the point, arguably, of being too hard on himself - but the truth is that the errors came from having to push over the limit to compensate for the limitations of his car. The result was that he pushed the Ferrari to results it did not deserve, a characteristic that separates the great from the merely very good.

If he so far has seemed more controlled this year, it could be because, in this year's Ferrari, over-reaching is no longer necessary.

"I have been in this situation in the junior categories but to be in it in F1 means a lot," he said, "especially after the last two years and especially with a team like Ferrari. It feels incredible.

"The mindset is a bit different compared to the last two years because now I know that underneath me I have a car that is capable of winning and I don't really have to overdo things to do something extremely special and spectacular to get one or two positions - because I know it is in the car and I just have to do the job."

Can Ferrari keep it up?

Ferrari - Carlos Sainz's Melbourne dramas aside - have had a dream start to the season, fully delivering on their optimism that the reset of the new regulations would give them a much-needed opportunity to get back to the front after falling from the pace in recent years.

Now, their challenge is to keep it up in the face of the inevitable development battle.

This is a challenge Ferrari have failed on the last three occasions on which they have been contenders.

In 2012, when Fernando Alonso fought a marvellous rearguard battle in a car that was never fully competitive, he was eventually overhauled by Sebastian Vettel when Red Bull found some key developments later in the season.

And in 2017 and 2018, Mercedes' stronger rate of progress with its car was a key factor that led to Vettel's challenge fading in what was for much of the season the best car, along with a series of driver and team errors.

Leclerc is not much of a student of history, even relatively recent, but he's aware of the challenge, and believes Ferrari are up to it.

"To keep up with Red Bull is going to be difficult," he said, "but it is the same team that did this car that will work on the development for this year's car.

"There is no reason for us to be on the back foot. All the guys at Maranello have done a great job building up this car for this year. There are some developments coming and I am confident it will go in the right direction.

"Since the last two years, I have really seen a jump in the way we have analysed every weekend, in the way we have identified our weaknesses and how quick we were to react and try and get better in the places we were struggling. So I am confident the team can do a great job with development this year."

Next comes the Emilia Romagna Grand Prix at Imola, the closest track on this year's calendar to the Ferrari factory, where the famously enthusiastic Italian fans may be less capable than Leclerc of maintaining control.

"I am pretty sure there is a lot of excitement," Leclerc said, "but we need to make sure as a team that we don't try and overdo things. Because there will be a lot of expectations as always, but we need to stay calm." 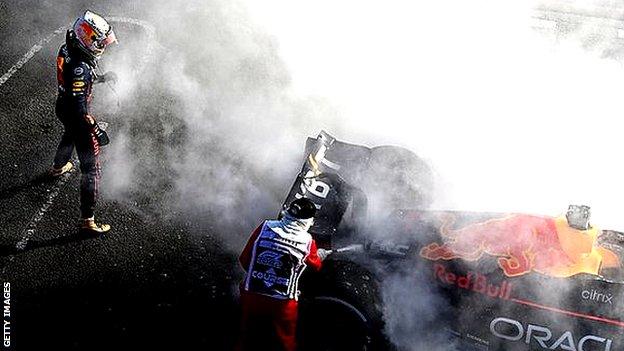 For Verstappen, Australia was already a difficult weekend before his retirement from the race. Never happy with the balance of his car, its difficult handling had a knock-on effect on tyre wear during the race.

While Leclerc could push on without damaging his tyres, Verstappen was tearing his, and the Ferrari driver was able to build a comfortable gap at will.

In the circumstances, the second place for which Verstappen was on course would have been decent damage limitation, but instead Red Bull managed to inflict more pain on themselves even than Leclerc was doing.

The suspected fuel leak that ended Verstappen's race was the second fuel-system problem to force his retirement in three grands prix.

It came after a difficult night for Red Bull, in which they made a number of changes to the car chasing a technical gremlin.

"Today was in general a bad day," Verstappen said, "not really having the pace, just managing my tyres to try to bring it to the end. It looked like an easy P2 anyway and I knew I could not fight Charles so there was no point to try and put pressure on him. But we didn't even finish the race, so it is pretty frustrating and unacceptable.

"I knew there was a problem. It was always going to be a question mark of finishing the race. These kind of things, if you want to fight for the title, they cannot happen."

The lack of pace in the car was also a concern for Red Bull, and motorsport adviser Helmut Marko, the right-hand man of co-owner Dietrich Mateschitz, described the weekend as "hopeless", bemoaning the car's handling, and also the fact that he believes it is considerably heavier than the Ferrari in a year in which all teams are struggling to get down to the minimum limit.

Team principal Christian Horner was more circumspect, as usual, but there was no mistaking his message.

"I'd rather fix a fast car than try and make a reliable, slow one fast," he said, in what appeared to be a gentle dig at erstwhile rivals Mercedes. "We need to get on top of it. We can't accept DNFs but we need to understand what the issue is and address it."

As for the lack of pace compared to Ferrari, rooted in the problems they were having balancing the car, Horner said: "We've got things in the pipeline that will help.

"We expected to be a lot closer to Ferrari in pace and they were untouchable today. We've obviously got some work to do."

Red Bull's problems have been a gift to Mercedes as well as Ferrari, but right now any sense that the constructors' champions are in the title fight is an illusion.

Although reliability has brought some strong results, with a podium apiece for Russell and Hamilton, the Mercedes car has actually slipped back in competitiveness progressively over the first three races and is, based on each car's single fastest lap of the weekend, on average not far off a second a lap off the pace so far.

Hamilton and Russell gamely fought with Verstappen's team-mate Sergio Perez in the race, each leading him at times, but the battle was always going to be lost, so much slower is the Mercedes than the Red Bull.

The team and their drivers continue to insist, as Russell put it, that they "have a lot work to do but I do think in time we will get there".

But the problem is the size of the gap and how long it will take to close it.

"Unfortunately there is nothing substantial in the pipeline," Russell said. "It is not going to happen soon. There will be incremental steps but others will be doing the same, so it may not the obvious we have made progress because Ferrari and Red Bull will also be making progress."

Hamilton said he "prefers to stay optimistic" but added: "It will not be easy. The gap is really big but there is a long way to go."

He said he would be spending the time before the next race "on a lot of Zooms" with the team, pushing for developments to the car.

"There is performance to be gained in areas that we know," he said, "and we need it now, not in two or three races."

Few doubt Mercedes will make the car more competitive in time. But it is another matter whether it is realistic to expect them ever to make it as fast as the Ferrari this year, let alone soon enough to do anything about Leclerc in the championship.