Lewis Hamilton says the problems with his Mercedes car are so bad that he is not enjoying driving it this season.

The seven-time world champion qualified fifth for the Australian Grand Prix and would have been seventh had it not been for problems affecting Ferrari's Carlos Sainz and Alpine's Fernando Alonso.

Hamilton was a second slower than Ferrari driver Charles Leclerc's pole position time and said the "porpoising" - a rapid bouncing at high speeds - that has afflicted his car since the start of the season was "really the worst characteristic I have experienced in a car and we can't get rid of it at the moment".

The 37-year-old, who returned to F1 this season hoping to avenge the controversial loss of the world title at last year's final race, admitted winning was "a long way off".

And he admitted there was no solution on the horizon for Mercedes' problems.

"It takes a long time to make stuff but there is nothing particularly exciting coming at the moment," he said. "I wish I could be optimistic and say the next one we have something better coming, but at the moment we don't."

Mercedes at a loss

Mercedes believe that fixing the "porpoising", which is caused by a disruption in the airflow under the car, would be the single biggest step they could make towards recovering competitiveness this year.

But their quandary is that the Ferrari also exhibits the problem and that remains a far faster car.

"I don't understand it and I don't think anyone does," Hamilton said. "I wish ours was the same, but it's not."

"Our bouncing is worse in the sense that we are carrying it into the corners, into the high speeds so we see where we are losing the performance," he said. "On sector one, we are very competitive when you look at the overlay, and sector two we are competitive. Sector three, through Nine and 10 we are losing all our margins, almost a second through a couple of corners.

"Is curing the bouncing the miraculous unlocking of a second? No, for sure not. But there are many other little improvements we can make on weight and a few others where we can optimise, and we just need to chip away at the small gains while understanding the car.

"I'm optimistic we are going to get there eventually. Whether it is is in two races or five or by the end of the season, I don't know."

Wolff's representation of Mercedes' pace relative to Leclerc was not quite accurate - Hamilton was 0.235secs slower than Leclerc in the first third of the lap and 0.214secs off in the second. But it is true that he lost the majority of his time - 0.468secs - in sector three, which starts with the fast chicane of Turns Nine and 10.

Hamilton said the phenomenon was so bad in Friday practice in Melbourne that he nearly lost control of the car on the curving straight before Turn Nine.

"We had so much porpoising down that straight that I had, like, an oversteer moment in the middle of the straight," Hamilton said. "It was like, 'This is ridiculous.' But it wasn't the case today."

Mercedes had not fixed the problem - they had benefited from a decision by race director Niels Wittich to remove the controversial fourth DRS overtaking zone on the flat-out but curving run from Turn Six. This meant that the DRS - which reduces drag and downforce - could not be used on that section any more, so speeds there were reduced and the cars more planted.

Hamilton said it was "good" that the DRS sector had been removed - although team-mate George Russell, who qualified a place and just over 0.1secs behind, said he disagreed with the decision and that removing the DRS there made his porpoising worse.

Slightly different set-ups aside - Russell said his was "more aggressive" - the opposing views of the Mercedes drivers on that topic seemed an appropriate reflection of just how lost the team are when it comes to the performance of their car.

Why was the DRS sector removed?

Red Bull's Max Verstappen also said he did not agree with the decision, saying: "There was only one team who complained about it and it got removed this morning so I don't really understand."

Verstappen was referring to the fact that Alonso had been by far the most vocal driver on the safety risk of running DRS through that sector in the drivers' briefing on Friday evening.

Alonso, as it happens, was a surprise contender for pole in an Alpine much-improved by some small upgrades and the team unlocking some of its secrets. The technical failure that caused him to crash on his first lap in final qualifying - which the team have not publicly revealed - was a bitter blow for a man who, as Alonso pointed out, has waited nine years since he last had a competitive grand prix car.

Anyway, back to the DRS. After Alonso had made his point, Wittich asked all the teams for their views on the matter. Five of them - half - replied that they would prefer for it to be removed, so Wittich preferred to err on the side of caution.

The situation in which Mercedes find themselves is made worse by the fact that the porpoising problem cannot be solved in typical fashion, as it does not show up in either CFD simulations or in the wind tunnel.

The reason for the phenomenon is known - somehow, the airflow under the car is "stalling" at a certain car speed. This causes a loss of downforce, which lifts the car up, before the airflow reattaches, sucks the car down and then the problem repeats.

Experts who have experience of porpoising from F1 40 years ago - the last time cars used the aerodynamic philosophy that has been reintroduced with this season's rule changes - believe the problem is likely to be rooted in one of two areas.

It is thought the cause is likely to be either the floor flexing somehow, somewhere, or it touching the track and then lifting again. Or both. The difficulty is working out where and how this is happening.

Wolff said: "I believe we will get it nailed. Many other teams, like Ferrari, still have some bouncing but they have done many other things right that we didn't perform very well. The same with Red Bull - their car got quick in testing in one day by bringing the [bodywork] upgrade [at the end of the final pre-season test].

"This car is difficult to correlate because you can only move the car with a certain frequency in the wind tunnel and on track it does something completely different.

"It is a new way of analysing aero data, a new way of correlation between the simulations and the real world which needs to be understood. We have the tools and the people to understand it but we haven't found it yet."

Driver underpants and jewellery in focus 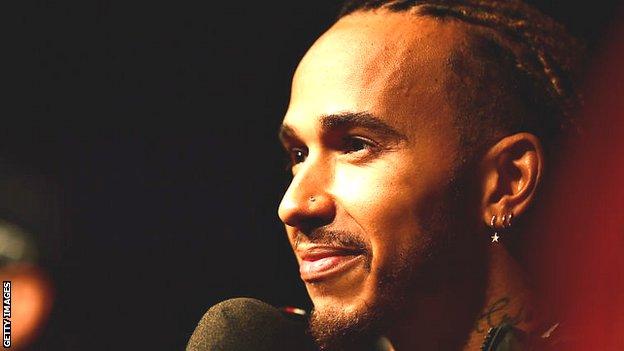 The DRS on the back straight took up a very small amount of discussion in a drivers' briefing that ran to two hours, the majority of which was taken up by the reminder the FIA gave before the weekend that the wearing of jewellery and non-compliant underwear in a racing car was forbidden.

Inevitably, given Hamilton's visible nose stud, this was immediately perceived by some to be targeted at him. But that was not the case. The nose stud is a minor concern for the governing body.

Far more worrying for the FIA was the fact that they had discovered - it is not quite clear how - that some drivers are racing in normal underwear, which is not fireproof and is therefore a risk to them, as it could melt in a fire. And the same goes for a watch with a plastic strap. Metal jewellery, of course, is a heat conductor and would risk worsening injuries in a fire.

Hamilton said "it was the longest driver briefing of my life" - a point true, it seems, both in a literal and figurative sense.

"I don't really understand the small things they're picking up, like the underwear," he said. "Are we really talking about that sort of thing? Anyway, we move on."

More of a concern for Hamilton was that the meeting was held with what he perceived to be a disregard for the risks of Covid - catching which is still a major risk for drivers as it means they have to miss races, as Sebastian Vettel has already had to do this year.

"No-one in the drivers' briefing was wearing masks," Hamilton said. "Some of the drivers were. Most of the FIA weren't, which for me was uncomfortable."