Every once in a while, a Formula 1 driver comes along who from a very early stage in his career leaves no doubt whatsoever that he is a rare and special talent.

George Russell, who is joining Mercedes next year as Lewis Hamilton's team-mate, is one of those drivers.

The 23-year-old Briton has been in F1 since 2019, and has been driving for all but one race of that time a car that belongs at or close to the back of the grid.

And yet almost every weekend Russell excels, does something that makes people sit up and take notice, underlines his credentials as a star of the future that little bit more heavily.

Everyone has seen it. From Mercedes team principal Toto Wolff, who has made the decision to promote Russell, to the driver's rivals.

Last year, before he made his comeback with Alpine this season, double world champion Fernando Alonso was asked which of the younger generation of drivers had most impressed him while he had been watching from the sidelines.

"George Russell is the one that surprises me every weekend," Alonso said. "How he's driving the Williams. Zero mistakes. I'm really surprised about his natural speed."

Russell, he said, "was putting in something special every weekend".

At Monaco this year, Russell became the latest driver with whom Alonso swapped helmets to add to the collection on display in his museum in Oviedo, northern Spain. Alonso wrote on the one he gave to Russell: "George, you rock. Future world champ."

The admiration is shared down the grid. Ferrari's Charles Leclerc, a karting contemporary and friend of Russell, says he is "just extremely talented" and "special". Red Bull's Max Verstappen says he is "very impressive". 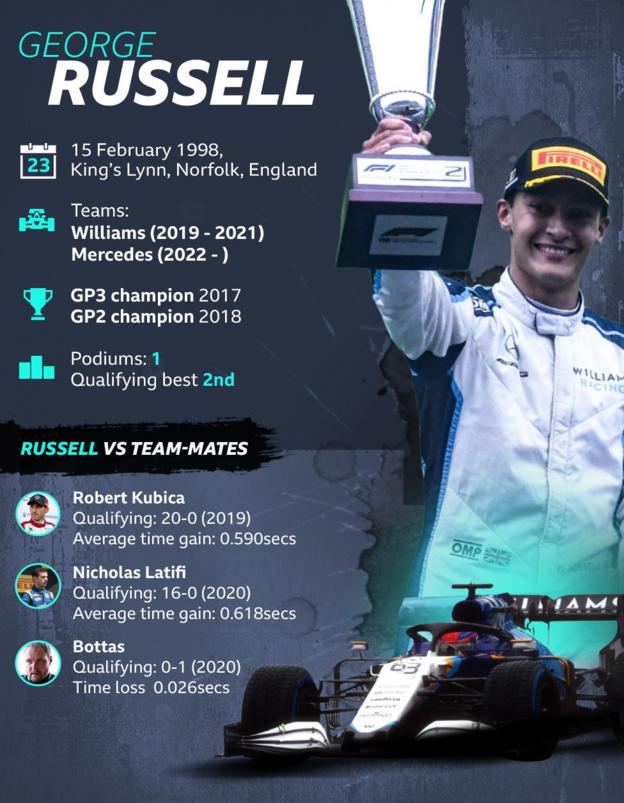 The catalogue of high-quality moments Russell has compiled while driving his uncompetitive Williams is long, but it's worth mentioning a few highlights.

There was qualifying at the Tuscan Grand Prix last year, when he set his fastest qualifying lap despite going fully off the road on to the grass at 173mph exiting the Savelli left-hander, and keeping his foot hard down through the even faster, flat-out Arrabiatta corners that immediately follow.

That breathtaking bravery kept intact a record that stands to this day - in more than two and a half seasons, he has never been outqualified by a team-mate at Williams.

On average, the Williams is the ninth quickest car over one lap this season. Yet Russell has three times in 12 races qualified it in the top 10, and his average grid position is 12th.

Russell has been so good in qualifying that he has earned himself a nickname that reflects it - 'Mr Saturday'.

He excels in qualifying almost by the race, but by far the standout performance was in the wet at the Belgian Grand Prix last month.

With a lap that will go down in history as one of the most impressive of all time, Russell put the Williams on the front row. In doing so, he outqualified Hamilton, who has produced some of his most brilliant achievements in the wet, in a Mercedes. Think for a moment what that says about the level Russell was operating at.

Russell is not all about one-lap pace, though. There was this year's Emilia Romagna Grand Prix, when in damp conditions Russell was contesting ninth place with Hamilton's team-mate Valtteri Bottas, before the pair crashed while Russell was trying to pass.

And this year's Austrian Grand Prix, when he held off Alonso's much faster Alpine for 10th place for 14 laps with one of the best displays of race-craft seen all year, before finally succumbing to the inevitable with three laps remaining.

But perhaps most of all, there was Russell's one-off race for Mercedes at last year's Sakhir Grand Prix, when he stood in for Hamilton after the seven-time champion contracted coronavirus.

Russell had just two days' notice. The car did not fit him - it gave him pains in the shoulder and he had to wear driving boots a size too small to get his feet into the cockpit. He needed ice on bruises at the end of every day in the car, and he was using Hamilton's gear change and clutch paddles, which were too small for his fingers.

Yet he missed out on pole to Bottas by just 0.026 seconds, won the start, and was well on the way to a maiden victory when Mercedes threw away the race with a pit-stop error during a safety-car period.

Wolff said in the aftermath of that race: "It's not going to be George's last attempt to win a race. This is just the beginning of a fairy tale that didn't work out today and I would say a new star is born.

"We learned George Russell is someone to count on in the future. He has all the potential and all the ingredients that a future star needs."

Williams will miss Russell, yet they accept that Wolff could not reasonably take any other decision.

"He has an immense amount of natural talent, all that stuff you can't teach and can't describe. He has learnt an enormous amount. Hopefully, when he looks back having been extremely successful, he will realise how much he did learn from a difficult couple of years.

"He's also got a really good personality - determined and demanding as he needs to be, but also sensible and calm. We need to see him more often in a more competitive car [to judge him definitively], but he has everything it takes to be really successful."

How will it affect Mercedes?

An interesting sub-plot over this season has been Hamilton's general lack of enthusiasm for the idea of Russell as his team-mate, whenever the topic has been brought up.

Hamilton, despite surely knowing which way the wind was blowing on Wolff's decision, has taken every opportunity to say he would prefer Bottas to stay, and to point out how great their working relationship is and how well the team works with the two of them together.

Until, that is, last weekend's Dutch Grand Prix. With Russell's move pretty much an open secret within F1, Hamilton admitted his future partner was "incredibly talented".

Bottas has been an excellent team player and, for the most part, a compliant and supportive partner for Hamilton, who said he had felt obligated to defend his current team-mate. But, fundamentally, the Finn has also not been especially close to Hamilton's level.

Hamilton is statistically the greatest driver of all time, and would back himself against anyone. But he knows all about what can happen when a team-mate challenges him, whether by being pretty much on a par on performance, as Alonso was in 2007, or by working hard at minimising his weaknesses, doing his best to disrupt Hamilton's equilibrium inside the team and benefiting from a reliability off-set, as happened with Nico Rosberg.

Each time, the competitive tension was off the scale, and harmony in the team almost non-existent.

Wolff has always said that he wanted to avoid that happening again, and it was one of the reasons why he kept Bottas for so long.

Now, though, Hamilton is approaching 37. He has a contract for at least another two years at Mercedes, but just by virtue of biology he is closer to the end of his career than the beginning. Wolff has had to think of the future, and Russell has made the case to sign him too convincing to ignore. Quite apart from the fact that not signing him would have meant risking losing him, not something Wolff felt was a wise idea.

Among the many benefits are that a Hamilton-Russell line-up would be expected to make Mercedes a stronger team heading into an era when the cars are expected to be far closer together on performance following the major rule change being introduced next year.

How will Russell compare with Hamilton? That remains to be seen. But Hamilton's title rival Max Verstappen said: "For sure he will make it very difficult for Lewis."

Alonso says: "It is going to be more interesting because Valtteri was not maybe fast enough to put some pressure on Lewis on a couple of occasions. With George, we can see a better competition inside the team."

For Russell, this is now a whole new level of challenge.

He will be competing against the best driver on the grid - possibly the best driver ever - in a competitive car every weekend, and it can't be known for sure how he will cope. But it seems a reasonable assumption based on the evidence so far that he will be significantly more of a threat to Hamilton than Bottas has been.

And Wolff seems to know it. After Sakhir last year, he said of a potential Hamilton-Russell partnership: "It would be an interesting situation to have them both in the team and maybe a bit of wild ride for all of us and maybe we'll have that in the future."

That future now has a start-date - March next year. Strap yourselves in. It could be really something to see.