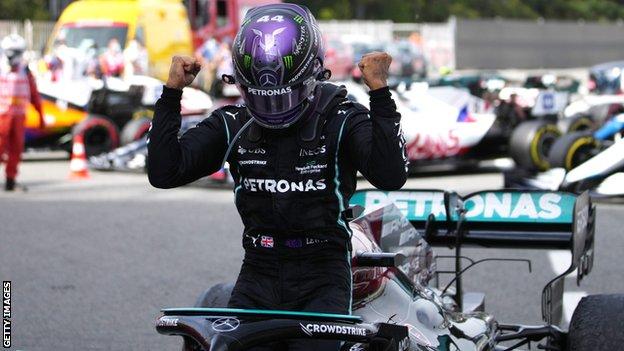 Behind the fabulous spectacle of the start of this Formula 1 season - four close races, in all of which title protagonists Lewis Hamilton and Max Verstappen have gone wheel-to-wheel for the win - there is an interesting paradox.

This is the closest Mercedes and Hamilton have been challenged since 2018, when Ferrari at this stage of the season had the faster car. But despite that, Hamilton has equalled his best-ever start to a year.

Only once before has Hamilton taken three wins and a second place from the first four races of a season. And that was in 2015, which turned into one of his most dominant championship victories.

It's hard to imagine this year's championship developing in the same way, given the tiny margins between Mercedes and Red Bull so far this season. But the way Hamilton and Mercedes are going, you would not rule it out either.

His victory in Spain was yet another superlative performance, coupled to another masterful Mercedes strategy, and it edged him to just two away from a century of victories, to go with the 100 career poles he achieved on Saturday in Barcelona.

The manner of Hamilton's brilliant fightback victory, after losing the lead at the start, demonstrates just how much he is revelling in the challenge Verstappen and Red Bull are posing him and Mercedes this year.

"Every year, I come back and I am always trying to improve," Hamilton said. "Most often it tends to be or seems impossible. But it's a necessity.

"The Red Bulls have started off incredibly strong. They do have a championship-winning car and opportunity - as do we. And it is going to take everything from us. Not only me bringing my A-game but the team bringing their A-game, weekend-in weekend-out, otherwise these guys will be winning."

A win built on foresight

At the moment, though, it is Hamilton and Mercedes showing Verstappen and Red Bull how it is done.

As with all the races so far this season, the Spanish Grand Prix came down to fine margins, to the extent that decisions made in the days before the race were crucial in deciding its outcome.

Again, the fight for pole was extremely tight, Hamilton edging out Verstappen by just 0.039 seconds - the average performance gap between the two cars over one lap this year so far is just 0.091secs.

But Verstappen immediately usurped Hamilton's advantage with a boldly aggressive move down the inside into the first corner.

"As soon as I got passed into Turn One," Hamilton said, "I was like: 'OK.' And switched into a different mode."

Hamilton was able to follow Verstappen closely enough to keep up the pressure, but not close enough to threaten a pass. And the statistics of a track on which overtaking is notoriously difficult suggested Hamilton was now in trouble, all the more so given the pre-race predictions that teams would make only one pit stop.

So when Verstappen pitted first and retained the lead - Hamilton unable to do so himself because he would have come out behind the second Red Bull of Sergio Perez - Mercedes looked snookered.

But this is where their pre-race planning came into play.

Mercedes suspected that the one-stop predictions would prove to be wrong, that two stops would be needed on a track which has always been tough on tyres.

So they saved two sets of medium tyres for the race - one new and one lightly used - to give them the chance to do exactly that.

Red Bull, by contrast, had only one set of new mediums and one set of new softs, which are too fragile to be a race tyre on which drivers can push hard for a long time.

In these decisions lay the foundations of the problems that were about to emerge for Verstappen.

Mercedes extended Hamilton's first stint by four laps, giving him fresher tyres than Verstappen for the second stint, on which he again pushed the Red Bull hard. Then, just 14 laps later, Hamilton came in again for that second set of mediums. He now had 23 laps to close a 22-second deficit and pass Verstappen. He did it with six laps to spare.

"It was interesting," Hamilton said, "because all weekend the one-stop strategy was the quickest (according to the computer predictions). But this is one of the most aggressive tracks for tyres and it isn't easy to make these tyres go that distance.

"It was clear to me, especially given how close I was pushing behind Max, that I was going to a two-stop strategy. And then the team told me and I was like: 'It's nothing new.'

"Of course, when I came out 20-odd seconds behind, it seemed so far, such a huge gap to close. I didn't know if I would have enough pace at the end tyre-wise, but he will have even worse. So it was the perfect strategy."

Did Red Bull mess up?

It was an exact replica of Hamilton's victory over Verstappen in Hungary two years ago. Then as now, Red Bull insisted at the end of the race that there was nothing they could have done to prevent Hamilton's victory.

"Too slow," Verstappen said. "There is not much else to discuss. I tried everything to manage it as good as I could but it is just not enough when behind they are pushing you and you see there is clearly a bit more pace.

"For Lewis to be (able to follow) that close, it just shows there was not much I could do out there to make a difference.

"We tried everything. I got ahead in the start and then it looks good when you are leading for so long. But overall we were just lacking a little bit of pace in the race and it has been like that so far this season, very competitive in qualifying but in the race struggling a little bit more."

There is, though, another way to look at the race. Some argued that Red Bull could have done what Mercedes did and committed early to a two-stop. This would likely have reversed the roles - Hamilton now leading and Verstappen chasing him down.

But this is a tough decision to make when you have the lead at such a track - and even Mercedes F1 boss Toto Wolff admitted that.

"(If you are behind), you have less to lose," Wolff said. "You end up second on the road where you were anyway or you are first."

Red Bull team principal Christian Horner made the same point, even if he did admit that his team's tyre strategy pre-race had boxed them into a corner.

"It would be a hell of a bold decision to pit from the lead on lap 42 when all the predictions were that the tyre should (get to the end)," Horner said. "And they would have got to the end, it (just) wouldn't have been the fastest way to the end.

"Track position is crucial here and we had been able to maintain it until that point - and also remember they had a set of mediums and we had a set of softs that wouldn't have had the range the mediums would have.

"The reality is whatever we would have done they had a faster car with slightly less deg."

So far, the fight between Mercedes and Red Bull has been conducted in good spirit. But there is just the beginning of the sense of a bit of needle creeping in.

Before the race weekend, Hamilton was talking up the number of mistakes his rivals have been making. And during it he made a reference in a TV interview to a "bendy rear wing" on the Red Bull car that was giving them an advantage on the straights.

This is a reference to a belief within Mercedes that they have spotted the Red Bull rear wing leaning backwards down the straights.

This is an old trick in F1, at which Red Bull have proved especially adept over the years. In the past, clever manufacture of carbon-fibre has built aero-elasticity into wings. The idea is to create just the right amount of flexibility to allow wings to bend above a certain speed and reduce drag before snapping back into place for the right amount of downforce as the car slows for a corner.

Horner was asked about this after the race.

"The car's scrutineered thoroughly and there are pull-back tests, all kinds of tests it has to pass," he said. "The FIA are completely happy it has passed all the tests that are pretty stringent.

"I was surprised to see his comments, but it is something Toto has mentioned to me previously. So I doubt it was Lewis' opinion. It probably came from elsewhere."

A tough guy to beat

The picture of the 2021 season has changed dramatically in the last couple of months.

Mercedes struggled in pre-season testing, were beaten to pole by Verstappen at the first race of the season in Bahrain by nearly 0.4secs, and won it only after the Dutchman was forced to hand back the lead to Hamilton after passing him by going off the track. Then, the world champions appeared to be on the back foot.

Verstappen won the second race at Imola and could have had pole both there and in Portugal but for driving errors.

Suddenly, though, Hamilton is turning the screw. He has a 14-point lead after four races and looks stronger than ever.

Horner said: "We have to take the positives to the next race in Monaco, that we have managed to push them so close at this circuit, a track where they were a long way ahead last year and which has been a strong point for them.

"Every Grand Prix apart from Bahrain there has been less than 0.1secs between us and pole, so it has been phenomenally close. We need to make sure we beat Mercedes in Monaco, but it will be incredibly tough."