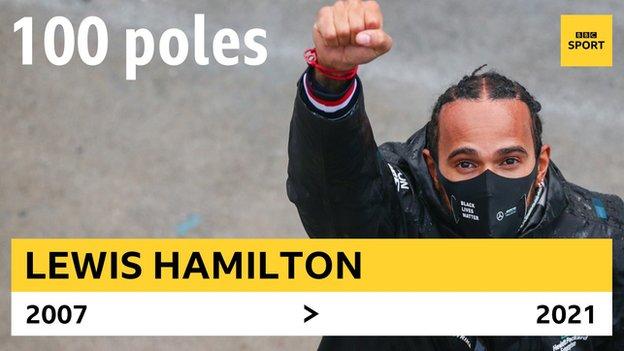 Hamilton's Mercedes was just 0.036 seconds faster than Verstappen, who was in turn 0.096secs ahead of the second Mercedes of Valtteri Bottas.

Ferrari's Charles Leclerc pulled out one of his trademark stellar laps on his last run to take fourth from Alpine's Esteban Ocon.

Ferrari's Carlos Sainz was sixth ahead of McLaren's Daniel Ricciardo. 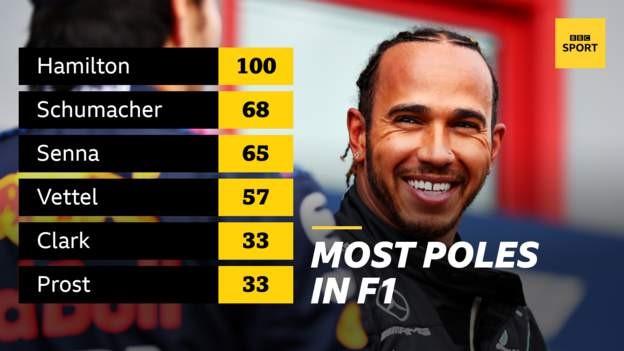 Verstappen had looked the man to beat going into the final part of qualifying after he set a stunning lap in the second knock-out session.

He was 0.5secs clear of the Mercedes on his first run and did not bother going out for a second, and even so the Mercedes drivers could only get to within 0.2secs of him.

But things turned around in the final part of the session and Hamilton pulled it out of the bag.

"P3 was looking really good, we have been strong all weekend," he said. "I made some changes, I had a bit of anxiety about the changes we were going make. You always try to make them better but it's a bit of a gamble. It was my call in the end.

"We made this change and as soon as I got out it was immediately: 'This is the wrong way. That's why I was behind the whole way through qualifying.

"I was making changes all the way through to try to elevate the pace.

"I can't believe we are at 100. It's down to the men and women back at the factory who are just continuing to raise the bar and never giving up. It has been a dream to work these guys. Who would have thought when I made the move at the end of 2012 that we would get to 100? I am ecstatic, like it's my first.

"The set-up that I made I just had so much understeer. The car was very lazy and wouldn't turn around the corners in the way I wanted.

"I was making small adjustments within what we are able to change to get the car to turn and then it is just pulling everything together. It was my cleanest lap. I will always remember that."

Verstappen said: "Both laps were pretty decent, the second run was a little worse for whatever reason but second for us here on this track is very good today.

"We know they are hard to beat around here but to be that close I can be very happy with that."

The grid positions set up what promises to be another gripping race between Hamilton and Verstappen, who even after three races have made this a two-horse championship fight of remarkable closeness and intensity.

Hamilton's record would have seemed unthinkable until he started his run of success with Mercedes - and it is a remarkable achievement. He stands 32 poles clear of the next most successful qualifier in F1 history, Michael Schumacher.

Leclerc had looked on the back foot in qualifying, slower than team-mate Sainz pretty much throughout.

But as he so often does he pulled out something special on his final run, when conditions changed and he was the only front-runner to improve his time and nipped ahead of Sainz by 0.12secs.

Ocon did a stellar job in the Alpine to split the Ferraris, again out-performing team-mate Alonso, although the veteran Spaniard will have been pleased to show the pace to get into the final part of qualifying for the first time since the first race of the season.

Ricciardo, who like Alonso has admitted he has been struggling to get the most out of his car for his new team this season, out-paced Norris for the first time since the first race of the season, although both had messy sessions that made a direct comparison difficult.

And Lance Stroll was the faster Aston Martin driver in 11th, team-mate Sebastian Vettel managing only 13th, 0.1secs behind.