Lewis Hamilton says he and Mercedes "can't continue to rely on mistakes" from rivals Red Bull if they are to win the title this season.

That advantage has been influenced by small but key errors from Red Bull and their driver.

"In terms of overall output through the weekend, we've done a better job," Hamilton said.

"We have a good package but it has weak areas which we are working on.

"You're seeing the closest battle you've seen for some time. Max is performing exceptionally well. He has a championship-winning car and team without a doubt who can really pull off the job this year if we don't do our job."

Mercedes went into the season behind Red Bull on pace, especially in qualifying, but have had two poles - one from Hamilton and one from team-mate Valtteri Bottas - and two wins for the seven-time champion, against one pole and win for Verstappen.

Verstappen lost the lead in the first race in Bahrain when Mercedes' strategists made Hamilton's first pit stop earlier to jump him ahead.

And Verstappen had to hand the win to Hamilton after catching him and passing him late in the race because he had exceeded track limits in making the overtaking move.

Verstappen then lost pole at the Emilia Romagna Grand Prix after an error on his fastest qualifying lap.

In the race, Hamilton was lucky to be able to recover from going off track and damaging his car. The race was stopped after a crash involving Bottas and Williams's George Russell shortly afterwards, which allowed Hamilton to reclaim the lap he had lost and recover from ninth to second after the restart.

In Portugal last weekend, Verstappen lost pole after going beyond track limits when caught by a gust of wind on his fastest qualifying lap.

He then had a slide out of the last corner shortly before Hamilton passed him for second place, before the Briton went on to pass Bottas for the lead and win.

And Verstappen lost the point for fastest lap after exceeding track limits again. 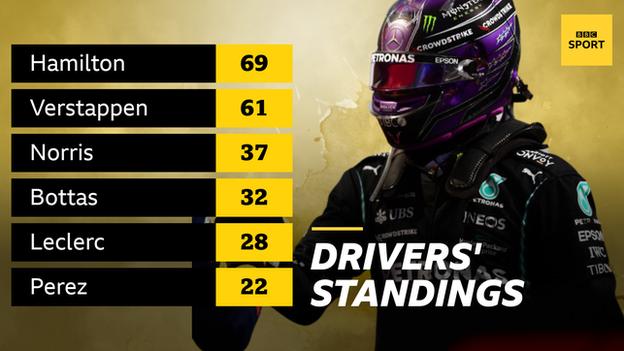 Hamilton said: "Definitely the first test didn't look great and the first race we were still up there but you could see the deficit to the Red Bulls.

"We are keeping our heads down and working away.

"From my side, I am really happy with the output so far. You are always trying to raise the bar and make as few mistakes as possible. But they have been there and I am grateful because you learn from them, but there are 20 races to go."

Verstappen said: "I always try to get the best possible results out of it. I went twice outside of the track limits where it cost me basically a pole and a fastest lap but it's also because I don't settle for second or third.

"It is exciting and I am looking forward to every single battle. We finally have a car which is capable of having good results every weekend, whether that is first or third or second it will depend on the track.

"It is really enjoyable. So far we have had some good results. I am happy, things can always go better but from both sides, from the car or myself. It is never good enough even if I would have won three races so far."

Bottas determined to bounce back

Hamilton is already 37 points clear of Bottas, who is fourth in the championship behind McLaren's Lando Norris after a difficult start to the season for the Finn.

But Bottas said he was determined to try to recover the lost ground and was not concerned that Mercedes might try to use him to help Hamilton's fight against Verstappen.

"There are still 20 races to go which is a huge amount of points and I am definitely not giving up on the goal this year," Bottas said. "I believe the hard work will pay off and keep believing and I know the results will come and pay off.

"Any team orders, I am not worried, not at all. I know there is a bit of a gap now but it is very early days so no point starting to think about that."

And Bottas rejected a report in a British tabloid that he could be dropped and replaced by Russell before the end of the season.

"I know I am not going to be replaced in the middle of the season," he said. "As a team, we don't do that. There is only one team that does that kind of thing in F1 and we're not that.

"There is always nonsense around and that is part of the sport."