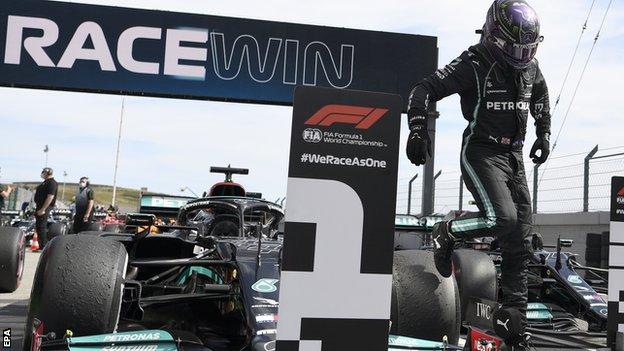 This one meant a lot to Lewis Hamilton.

Any victory feels good, but even as the Mercedes driver closes on 100 Grand Prix victories - the one in Portugal on Sunday was his 97th - some are more special than others. And this was undoubtedly one of the special ones.

The fight Hamilton and Mercedes are facing against Max Verstappen and Red Bull this year is arguably the toughest they have faced since they began their domination of Formula 1 in 2014.

So for Hamilton to pass not only Verstappen but also his own Mercedes team-mate Valtteri Bottas to take his second victory in three races in a season the team started very much on the back foot was an achievement to savour.

In all three races now, Hamilton and Verstappen have fought wheel-to-wheel, but this was perhaps the most definitive statement the reigning champion has yet made. He dropped to third in the early laps but was in the lead by lap 20. Once Hamilton was there, the fight for the win was over.

"He just drove an immaculate race," team boss Toto Wolff said. "But it makes no sense to talk about these exceptional Lewis performances because they have become quite regular now. It's his standard now and he sets that standard for himself."

Hamilton being Hamilton, he made his victory at Portimao look easy. It was anything but, and the evidence for that was provided by the two drivers he was racing against.

Bottas, Hamilton and Verstappen were running in their grid order when the safety car came out after two laps in Portugal. It pulled off at the start of lap seven, leaving Bottas in control of when the racing restarted, and Hamilton made his only mistakes of the day.

He was looking in his mirrors to check where Verstappen was behind him, he said, at exactly the moment Bottas decided to jump. "That wasn't great," Hamilton laughed. But worse was to come.

The split second's reaction advantage allowed Verstappen to get a run on Hamilton, who recounted the incident in the post-race press conference, sitting between his vanquished rivals.

"I was in Valtteri's tow," Hamilton said, before turning to Verstappen and addressing him: "You were about to pull out [to try to pass], and I pulled out and gave you Valtteri's tow. And I was like: 'You idiot,' to myself."

Verstappen swept around Hamilton's outside into Turn One. It was a lovely move and now Hamilton was back to third, with a lot of work to do.

He was in no mood to mess about.

Trust, honour and the 'magic of Lewis'

Following closely behind another F1 car is notoriously difficult, but Hamilton stuck to Verstappen's tail like glue.

On lap 10, he said, he spotted the Red Bull driver make a mistake at Turn Five, which allowed Hamilton to close in further. Exiting the last real corner, Verstappen made another, his car fishtailing as he accelerated, giving Hamilton the run on him.

Verstappen protected the inside, but Hamilton went there anyway, kicking up the dust off line, and they went around Turn One side-by-side again, this time the Mercedes coming out in front.

Next, Bottas. The Finn had been unable to pull away from Verstappen, and now he had Hamilton right behind him.

The combination of low-grip track surface taking the strain off the tyres, and Hamilton's ability to compensate for the lack of downforce with his skill and feel, allowed him to stay close.

For nine laps he pressured Bottas before getting a run on him at the start of lap 20. This time, he chose the outside. Bottas was still fractionally ahead as they turned in, and Hamilton had to give him space, wide through the corner. But still he pulled off the move.

Over the rest of the race, neither Bottas nor Verstappen were able to follow each other closely enough to try an overtake in straight racing situations.

Verstappen was perhaps handicapped by a slight straight-line deficit, and his passes came as a result of Hamilton's re-start mis-step and then a slide from Bottas on his first lap after his pit stop.

Bottas' didn't come at all, although he lost the chance to try to re-pass Verstappen when an exhaust sensor failure triggered a low-power safety mode for a couple of laps just as he was getting close to being within range of being able to use the DRS overtaking aid.

How does Hamilton do this? Inside Mercedes, they call it: "The magic of Lewis". The man himself dodged questions about it, and preferred to focus on how much he was enjoying the fight with Verstappen for this year's title.

"Massively excited - and we all are as a team to be in the fight with Red Bull," he said. "I feel like maybe Red Bull lost a little bit of performance this weekend because I don't think we improved but from the last race to here [and] I think they took a slight step closer to us for whatever reasons.

"But this is great. It is what we all live and breathe for, to get up and fight and try to pull out the smallest bits of performance to fight a great competitor."

Verstappen, too, is enjoying it.

"It's been really cool," he said, "especially when you race a driver you know you can go to the absolute limits [with] and you can trust each other to race super-hard. That's always really nice.

"The three races we've had, it's been really close to each other but predictable. With Lewis, I have never had something like: 'Oh I am going to crash.' I have full trust in Lewis that we always give each other enough space."

Hamilton added: "It is down to respect. Both very, very hard but fair, and that's what makes great racing and great racing drivers. We will continue to keep it clean and on the edge. I don't think either of us have any plan to get any closer than it has been."

Did Red Bull let this one get away?

Hamilton leaves Portugal and heads to Spain this coming weekend with an eight-point advantage over Verstappen in the championship. The bosses of the two teams judged that situation in different ways.

Wolff said that he would never have believed after their troubled pre-season test, after Verstappen took pole for the first race in Bahrain by 0.4secs, that Mercedes would be in this position.

Red Bull had an aerodynamic upgrade in Portugal, to diffuser, floor and splitter, but team principal Christian Horner insisted they were "satisfied" to come away from the race with a strong second place on a track on which they finished half a minute behind Hamilton last October, and insisted Red Bull's performance in Portimao "bodes really well for us".

This year, though, is not last year. Red Bull started the year with a definite performance advantage, especially over one lap. And look a little deeper and it is hard to avoid the feeling that Red Bull have let some opportunities slip through their fingers.

In Bahrain, they lost the lead by allowing Mercedes to jump them on strategy. Then, when Verstappen caught Hamilton late in the race, he ran beyond track limits when passing him and had to give the place back. On fresher tyres, could he have waited a little longer for a cleaner, less risky move?

Verstappen won in Imola two weeks ago, but he should also have been on pole, and lost it by an error on his final qualifying lap.

And in Portugal there were more mistakes, even if they were small.

Verstappen set the fastest lap in qualifying - but lost pole again, this time because he had gone beyond track limits at Turn Four, so the time was deleted.

Could he have won had he started at the front? "You never know," Horner said. "Max had very good pace in dirty air. We lacked a bit of straight line speed. It definitely looked easier for Mercedes to pass us than for us to pass a Mercedes."

Verstappen had that wiggle out of Turn 14 in the race that allowed Hamilton to get the run on him and re-pass. And then late in the Grand Prix, he made another error.

Mercedes admitted they had messed up in pitting Bottas a lap too early at the end of the race to fit fresh tyres to go for fastest lap. That gave Red Bull the chance to respond with Verstappen. And Verstappen would have got it - except he went beyond track limits again, this time at Turn 14. The time was taken away, and the point went to Bottas.

In the context of all that, Horner was asked whether the weekend had got away from Red Bull.

"The margins are so tight that track limits have been quite expensive for us," he said. "The whole track-limits debate is just frustrating. It has been brutal for us across the three events - the win in Bahrain, the pole [here] and then the fastest lap.

"Let's not forget Lewis dropped the ball in a pretty big way in Imola and got away with it quite lightly.

"It's inevitable when you're pushing to the limit that it's all about those fine margins."

"It's close," Verstappen said. "I wish it was closer but it is still a long season. We can't afford to have any retirement or silly mistakes. We just have to keep on doing what we're doing."

On that, though, he's not quite right.

If things carry on like this, Hamilton will be champion again, because so far, over three races, close as it has been, Red Bull and Verstappen have not quite been at his level.

Hamilton sets a very high bar. And Portugal was just the latest example of how high that is.

"It was Lewis who won it," Mercedes trackside engineering director Andrew Shovlin said. "He was down in P3. He overtook on track twice. He got up front and he controlled the race. It's very difficult to pick the cars apart, but Lewis was the best driver today and that's why he was sat on the top step."