Lewis Hamilton has surpassed Michael Schumacher in one of Formula 1's two big all-time records, and he will soon at least equal him in another, making him the most successful racing driver of all time.

Hamilton's victory at the Portuguese Grand Prix on Sunday was the 92nd of his career, taking him beyond Schumacher's record of 91. At the time it was set, just 14 years ago, many thought it might never be beaten.

And it will not be long now before Hamilton equals Schumacher's tally of seven world titles - before heading into 2021 as a strong favourite to make it eight.

Looking through these lists of comparisons between the statistical achievements of the two drivers, the first impression is of how similar the numbers are in many respects. But there are also important differences that say a lot about their different abilities.

Beyond the near-ties in championships and victories, their tallies of podium finishes are also remarkably similar.

But let's look at those differences for a moment.

First, pole positions. Hamilton has almost 50% more than Schumacher in a career that is considerably shorter - a reflection of his standing as not only the fastest of his generation, but perhaps also of all time. Their numbers of front-row starts tell the same story.

Hamilton has also proved more effective at winning from pole - 56 times compared to 40 for Schumacher.

But there are other numbers in Schumacher's favour - he has more wins from second, and more than twice as many wins from third.

At first glance, this might suggest that Schumacher was a stronger racer. But anyone who has studied Hamilton's race-craft would dispute that.

In fact, these numbers are probably more a reflection of the different eras in which they raced. Schumacher's career was almost entirely during F1's refuelling era, and his Benetton and then Ferrari teams were unsurpassed in their ability to use strategy to win races.

And from 2003 - so for the final four years of his ultra-successful stint at Ferrari - cars qualified with race fuel loads, which meant it was not always advantageous to start right at the front. A better race result might be achieved by starting with a heavier fuel load, which meant a lower grid position but a long first stint - on the then very consistent and durable tyres - in which to gain track position.

In all, though, the stats have one clear, obvious message - these were the finest drivers of their eras, and two of the greatest of all time.

As with the general career stats, these lists of victories in classic grands prix emphasise the excellence of the two drivers.

There are some interesting anomalies, though. First, Hamilton's relative lack of success at Monaco is puzzling, given his extravagant gifts. And the same goes for Schumacher at Silverstone - there's no obvious reason why a man who was so strong at tracks like Suzuka and Spa should not have so much success at Silverstone, which has the same high-speed, flowing character.

But it's two tracks on which both men have had the most success that say the most.

Hamilton has always been fantastic around the Hungaroring, and that's because its combination of closely spaced, medium-speed corners perfectly marries with his skills on corner entry, where almost no-one else can match his ability to carry so much speed into the apex and still be fast on the exit. 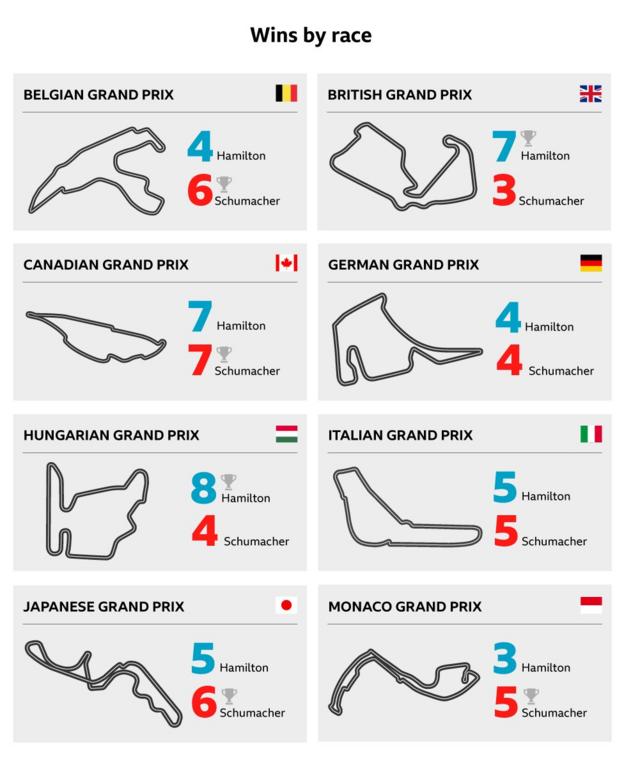