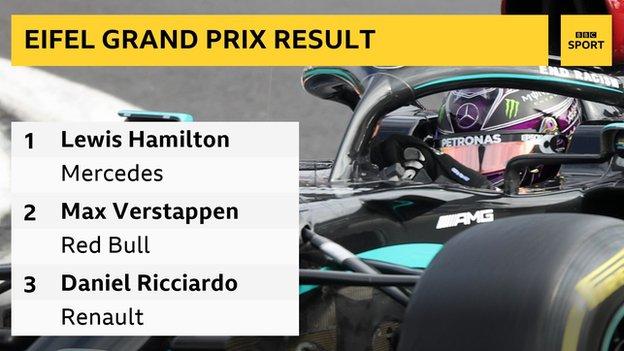 The Mercedes driver's win was the 91st of his career and he will surely break Michael Schumacher's record soon.

Hamilton extended his championship lead over team-mate Valtteri Bottas to 69 points after the Finn retired.

Behind Max Verstappen's Red Bull in second, Daniel Ricciardo scored Renault's first podium since returning to F1 as a constructor in 2016.

The race had been poised for a close fight between Hamilton and Bottas before the second Mercedes hit trouble at the Nurburgring in Germany.

Hamilton, second on the grid, made a better start than Bottas and dived for the inside at the first corner, pushing him wide, but Bottas held his ground and recovered the lead on the inside of the second corner.

That gave Bottas control of the race, but Hamilton pressured him hard and in the end the leader buckled.

Bottas handed the advantage back to Hamilton on lap 13, locking a wheel into Turn One and running wide, allowing Hamilton to close in and pass for the lead around the outside of Turn Two.

Three laps later, the race fell further into Hamilton's lap when a virtual safety car allowed him and Verstappen to pit for fresh tyres and retain their positions ahead of Bottas, and two laps after that Bottas retired with a suspected failure of the MGU-H, part of the hybrid system.

Although Verstappen stole the point for fastest lap from Hamilton on the last lap of the race, Hamilton's lead is close to three clear race victories with only six races remaining. A seventh world title - which would equal another Schumacher record - is beckoning.

A special trophy for Hamilton

Schumacher's son Mick presented Hamilton with one of his father's old helmets, from his last F1 season with Mercedes in 2012, to recognise the achievement.

"I don't know what to say," Hamilton said. "When you grow up watching someone and you idolise them, really, for the quality of the driver they are and what they are continually able to do as a driver and with his team week on week.

"Seeing his dominance for so long and I don't think anyone - especially me - thought he would get close to this record.

"It's an incredible honour but I could not have done it without this incredible team. A big thank you and huge respect to Michael."

A landmark for Renault

Ricciardo's podium was made possible by Bottas' retirement, as the top two had almost lapped the field before a late safety car was called to recover Lando Norris' McLaren, which had stopped with an engine failure.

But the Australian's result was well deserved. Renault have been making steady progress and Ricciardo, who has been outstanding this season, held off Racing Point's Sergio Perez in a battle over the closing laps.

A bet with team principal Cyril Abiteboul means the Frenchman has to have a tattoo in a design of Ricciardo's choosing. Abiteboul can choose size and placement. Ricciardo said he did not know what the design would be, but probably "something with a German flavour".

Norris had been fighting with Perez for fourth on divergent strategies for a while, but the early development of his ultimately terminal engine problem cost him time and he was running fifth before he stopped.

Norris' McLaren team-mate Carlos Sainz took fifth instead, ahead of Alpha Tauri's Pierre Gasly, who was able to pass Ferrari's Charles Leclerc for sixth place as a result of Ferrari's decision not to stop for fresh tyres at the late safety car.

And there were the first points of the season for Haas' Romain Grosjean and Alfa Romeo's Antonio Giovinazzi in ninth and 10th places.

Six races to go and they start with a new track for F1, Portimao on Portugal's Algarve on 25 October. It is a well-regarded track and the drivers are all looking forward to the challenge. And the weather should be a good deal warmer than the wintry conditions at the Nurburgring this weekend.