Susie Wolff has memories of Lewis Hamilton that go back to a childhood spent racing karts against each other, an era of innocence in what she calls the purest form of racing where money and politics and gender played no part.

"We've known each from the age of eight," says Wolff. "We competed against each other in go-karting then into Formula Renault. There was a race when we both finished on the podium. He was first, I was third. He was about 19, I was 21. I couldn't open my champagne bottle and he came over and did it for me. He'd had a lot more practice than I had."

Hamilton is now on 90 Formula 1 victories and a racing certainty to match Michael Schumacher's tally of 91 before, inevitably, setting a new record that may never be beaten. For Wolff, the girl from Oban who created her own slice of history in the sport, the happiness she feels for Hamilton is both personal and professional. There's the ties from their youth - "even at eight, we knew he had brilliance in him" - but also the fact that the champion's team principal at the all-conquering Mercedes is the great Toto, her husband.

Wolff's life in motorsport began as Susie Stoddart, a kid who always loved speed, be it a kart or a bike. Because she lacked a Scottish female role model, she had David Coulthard posters on her wall at home. Because she loves the sport so much she's still heavily involved, as team principal with Venturi Racing in the electric world of Formula E. The season is supposed to begin in January, but who knows for sure. What's certain is that Wolff's story is a fairly remarkable one.

"As an eight-year-old in a kart you're not conscious of gender," she says in the latest episode of This Sporting Life. "The moment of realisation came in the world championships in Portugal when I was 18. I finished 15th overall, which was a pretty solid result, but I got called up to the podium ceremony and was awarded a trophy for top female in the world. I remember being acutely embarrassed because I thought, 'I'm not here to be top female. I'm here to be the best driver'. Then I thought, 'how many females were in the race anyway?' I could only count four out of 150 competitors. That was no achievement. That was the first time it hit me that people were picking me out because of my gender."

The journey from there was quite a spin. Formula 3, German touring cars, then a development and test driver with Williams in Formula 1. In 2014, at the British Grand Prix, she became the first woman to take part in a F1 race weekend in 22 years. It was a huge moment that propelled her into a new level of recognition.

There was a vibe around the sport's old guard not just that she would fail, but that they also wanted her to fail. Not at Williams, but elsewhere. "Yes, 100%," she said. "The big question was could a woman handle the speed of the cars and the big development in technology that made them much faster than they were previously and much more physical in terms of G-force than they were previously? I could sense those who felt, 'she's never going to manage it'. I was very focused and I could cut out all the noise around it, but I certainly felt a huge amount of pressure.

"I wanted to be able to look back and say that I gave it my best shot, even if I failed. I just knew that for my own conscience I had to be able to say I gave it everything I had. I remember exiting the pits and being so crystal clear in my focus. When I got out on the track I was at a level of concentration that's difficult to put into words."

'I'm putting my money where my mouth is'

Her retirement in 2015 was her own decision but one that was based on a harsh reality - as good as she was she was never going to fulfil her ultimate dream of a place on the starting grid in a grand prix.

"The aftermath of retirement was very difficult," she explained. "I fell into a bit of a black hole because my whole identity had gone. I was Susie the racing driver and suddenly when people asked me what I did I didn't know what to reply. Those were difficult months. I was someone working towards a goal my whole life and had such a sense of purpose in my life and with that all gone I was a ship without any sails."

At the time, the legendary Stirling Moss made a few comments that hit the headlines. Amongst other things he said that women don't have the mental aptitude to compete at the top end of motorsport. He later phoned Wolff to say that he meant what he said but he didn't mean to include her in his assessment.

Is F1 any closer now to having a female driver than it was when she retired five years ago? "No, it's not, sadly," said Wolff. "It comes down to the numbers game. The talent pool of women competing in the sport is too low. There are 10,000 boys globally racing karts and if you're lucky there are 100 girls, 200 max.

"When I hung up my helmet in 2015, I wanted to try to inspire the next generation. I set up Dare To Be Different, my own foundation, and we joined forces with the FIA, the sport's governing body, and we now have Girls On Track, which is aimed at making the sport more accessible and creating more opportunities. 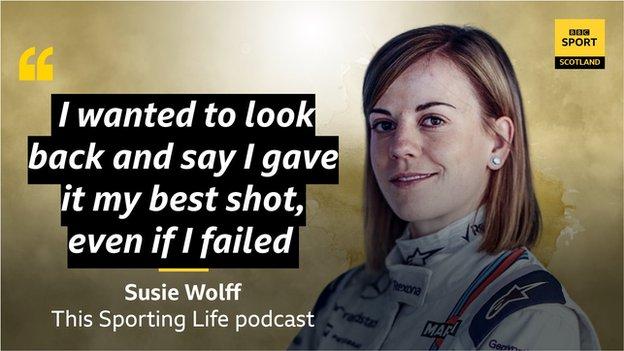 "It's not just about female drivers, it's the whole sport. If you look at the F1 paddock there are only 20 drivers, but there is nearly 4,000 people involved in making that event happen, from engineers to mechanics to journalists to physios - there are so many opportunities.

"We're still perceived as being male dominated and it has to change. It comes down to action. It's very easy to say you want to see more diversity, it's very easy to put a hashtag on a social media post, but it's action that creates change. In Toto's Mercedes team they have 12% females. Globally, with people competing in the sport, we are looking at under 2%, which is shocking. In my Venturi team in Formula E we have 33%, so I'm putting my money where my mouth is."

Being part of the electric revolution

Wolff was hesitant when the offer came from Formula E. To her, racing was all about the roar of the engine, the deafening noise of a car as it flew by. She had an offer to become a Formula E driver and said no chance. She was invited over to New York to have a look at what this thing was all about and she travelled with little expectation of being hooked.

"I was a cynic," she explained. "Electric racing cars? I don't think so. When I went to New York and saw what was going on I had to eat my words. These races happen in city centres, so we bring it to the public. Street circuits in some of the best cities in the world - it's really exiting. The technology is incredible, it's cutting edge and it's the stuff we'll be seeing on the roads in three to five years. It's a new way of racing. Being part of the electric revolution as a team principal is a great space to be in."

Her world has changed over time, but the same passion remains - for cars, for competing, for creating chances for other Susie Stoddarts. You don't need to be behind the wheel to have drive.

You can listen & subscribe to the This Sporting Life Podcast with Tom English on BBC Sounds here.